Part of mall ceiling collapses in Brantford, cause under investigation 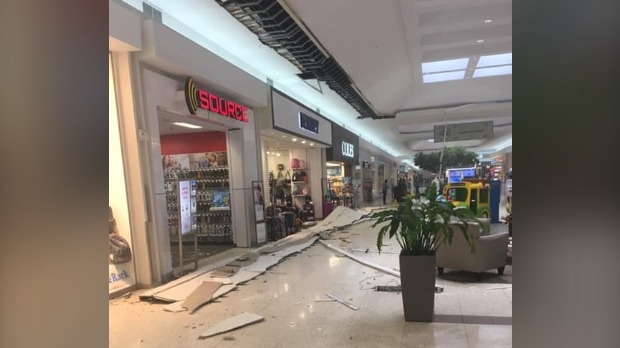 City officials are inspecting to find the cause of a collapsing mall ceiling.

The Brantford Fire Department says they responded to the incident at the Lynden Park Mall on Monday at around 5:35 p.m.

About 15 firefighters attended the scene.

Photos from the scene show drywall strewn across the floor and bare metal showing on the ceiling.

“Ceiling collapsed and mall was evacuated. No one hurt. Thank God!” says Tracy Colombe Foran in a post on Facebook.

An employee at a nearby store clarified that they didn’t close early—she says it was only the stores in the immediate vicinity of the collapse that closed.

Another woman, Nikki Wills, says she was walking by the scene and was able to get out of the way just in time as the ceiling came down.

Initial rumours indicated that the roof may have been compromised because of the rain, but that hasn't been confirmed. The city is still investigating the cause of the incident.

“The City’s Building and Property Standards staff conducted a joint inspection of the damage to the Lynden Park Mall building this morning as a result of last night’s incident and issued a Property Standards Order requesting an Engineer (P.Eng) assess the ceiling to determine the reason for the failure,” the city says in part in a statement.

A spokesperson says that city staff is grateful no one was injured.

The mall was open on Tuesday, but stores in the immediate area of the collapse remained closed.

No one from Lynden Park Mall was available for comment.