The Humane Society of Kitchener Waterloo & Stratford are seeing an increase in the number of abandoned rabbits.

Five stray rabbits were found outside the Kitchener Waterloo Animal Centre on Monday morning. Another one was seen in the area and is believed to be part of the group, but workers at the shelter haven't been able to retrieve the rabbit.

The agency believes they were left there sometime overnight and were loose on the property when staff members arrived for work.

The Humane Society is now caring for 18 rabbits at their Kitchener and Stratford centres, as well as in foster homes.

"We've had an increasing number of requests for rabbit surrenders over the course of the COVID-19 pandemic, with 34 rabbits on our waiting list at the moment," said Amanda Hawkins, the senior manager of animal care, in a press release. "We are here to support our communities and are trying to bring rabbits in as fast as we have space and foster homes to assist us."

The Humane Society hopes the long waitlist doesn’t deter people from reaching out to them if there is a situation where they can no longer care for their pets.

"Have a conversation with us to talk about what the urgency is and we can try to triage that list as best possible," said Calla James, the director for Community Engagement & Outreach.

They worry there could be more abandoned bunnies on the loose, part of the same group that were found outside their facility.

"We’ve identified one down the street," said James. "That’s hard because the next thought is how many were there in total? We don’t know."

Staff said the rabbits found outside their building are now safe but some are still shaken from being out in the wild.

"Very standoff-ish," said Diana Lozano, the Foster Coordinator. "A lot of them don’t want to be held at first. A lot of them just run away from you." 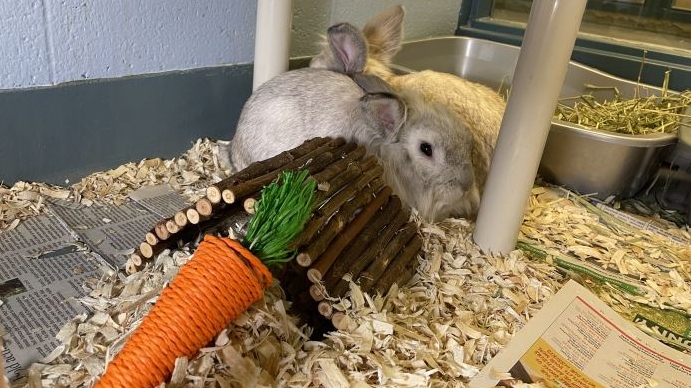 Two of the rabbits at the Humane Society of Kitchener Waterloo & Stratford. (Apr. 6, 2022)

The agency said it's hoping to find the animals new homes soon, and they currently have five rabbits available for adoption on their website.

The Humane Society also identified their immediate needs for the rabbits. Besides foster homes, they are requesting donations to cover medical costs for the rabbits, food (such as fresh greens, timothy and alfalfa hay), chew toys and gift cards for other essential items.

They also want to remind the public that abandoning an animal is an offence under the Provincial Animal Welfare Service (PAWS) Act. Anyone with information on the abandoned rabbits found at the humane society is asked to contact the PAWS team at 1-833-9ANIMAL.

Search teams and emergency aid from around the world poured into Turkiye and Syria on Tuesday as rescuers working in freezing temperatures dug, sometimes with their bare hands, through the remains of buildings flattened by a magnitude 7.8 earthquake. The death toll soared above 5,000 and was still expected to rise.

John Benoit of West Jeddore, N.S., says he has been beachcombing for over 50 years, but his most recent discovery -- a Killick anchor -- is by far his most memorable.