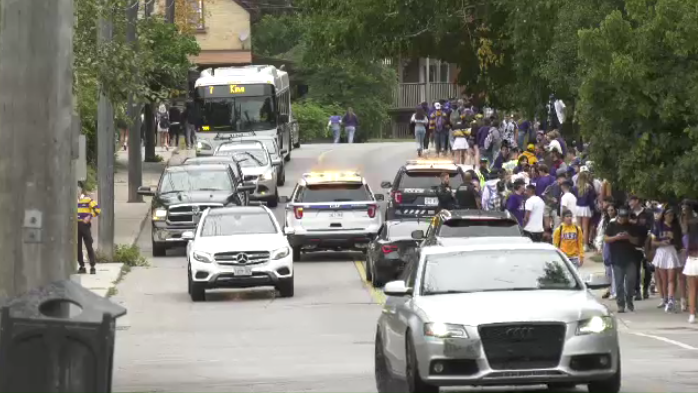 Partygoers have returned to Waterloo’s university district for homecoming festivities and revelers are excited to be back taking part in a long-standing tradition they missed out on because of the pandemic.

This will be the first time since 2019 that students will be able to celebrate without pandemic-related restrictions and officials are on high alert for what the weekend could bring.

Students dressed in purple and gold lined the streets and lawns of houses around the Wilfrid Laurier University campus Saturday afternoon, anticipating plenty of celebrations.

“Homecoming is the best day of the year. We’re coming home, I love homecoming,” said a student.

Fencing has been put up along Ezra Avenue which has seen partiers move over to the nearby Regina-Marshall Street area.

There are growing concerns that homecoming celebrations could get out of control after a party earlier this month on Ezra Avenue left a trail of damage including a badly damaged truck.

A resident living at the corner of Regina and Marshall Street reported an unsanctioned gathering Friday night that ended in violence.

“My neighbours’ cars got keyed and their tires got slashed. I got attacked in my own driveway to the point where I rebroke my jaw. If anyone tells me that they did just party respectfully, they’re lying to themselves. It was not respectful. It was pure, utter violence and chaos last night,” the resident said.

Police say the only charges handed out as of Saturday afternoon have been alcohol-related, along with noise and nuisance bylaw infractions.

A heavy police presence will remain Saturday evening as police continue to ask people to celebrate in a safe and lawful way.

The U.S. Senate passed bipartisan legislation Tuesday to protect same-sex marriages, an extraordinary sign of shifting national politics on the issue and a measure of relief for the hundreds of thousands of same-sex couples who have married since the Supreme Court's 2015 decision that legalized gay marriage countrywide.