Girl recovering, still shaken after dog bite to the face 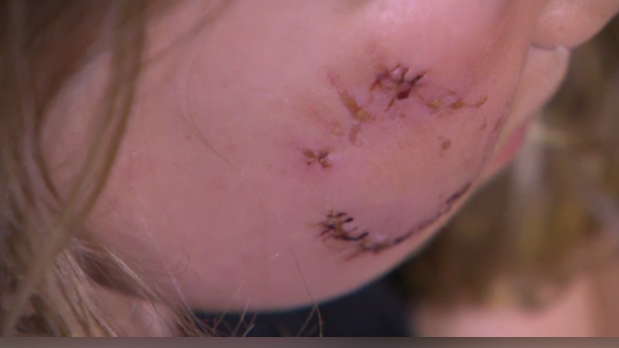 A dog bite left this girl with an injury that needed 19 stitches.

The dog that bit a six-year-old girl in Cambridge late last month has completed its ten-day observation period.

Public Health has confirmed that the animal doesn't have rabies, which comes as a relief to Michael Santos, the father of the young victim. Still, he says, he has lingering concerns.

“The dog should be removed from an area where there’s so many kids, you know what I mean? And the dog was on a leash when it happened,” he says. He stresses that he doesn’t want the dog put down, just removed.

The dog has been labelled as dangerous, meaning that a number of requirements can be put on the dog’s owners. These include keeping the dog confined in the home, muzzling the dog, and keeping it caged when a young person is in the home.

It’s unclear if any of those restrictions are in place: CTV News has made multiple attempts over the last week to reach Animal Control for comment, but has not heard back.

The girl is recovering but still needs bandages that cover 19 stitches changed twice a day. She has also been emotionally affected by the incident.

“I was thinking about the day that I got bit and I started crying in my classroom,” she says.

Now, the focus is on recovery. Dos Santos says he’s proud of his daughter, who has been resilient through the incident. For her part, she’s appreciated the support.

“I was really happy just to know that everybody cared about me,” she says.

The City of Cambridge says if another incident occurs, Animal Control can remove the animal from the house.