Flood leaves golf courses draining out and drying up

Even if golfers had somehow made their way onto Kitchener’s Doon Valley golf course over the weekend, they would likely have quickly abandoned their game out of frustration.

The course, like several other river-adjacent golf courses in Waterloo Region, was closed due to severe flooding.

“We had an extreme amount of water that ran through the golf course from the Grand River,” course superintendent Todd Doering said Monday.

Doering estimated that more than 20 of Doon Valley’s 27 holes were flooded out by the surging Grand.

Across the river – mostly – at Kitchener’s Deer Ridge Golf Club, 15 of 18 holes were considered unplayable. Thirteen greens were covered in water.

“We’ve got a big project ahead of us.”

At Deer Ridge, Monday was the first day crews were able to get out in full force and start working on cleanup. The biggest issue they found was that many of the course’s sand traps had washed out onto the fairways. 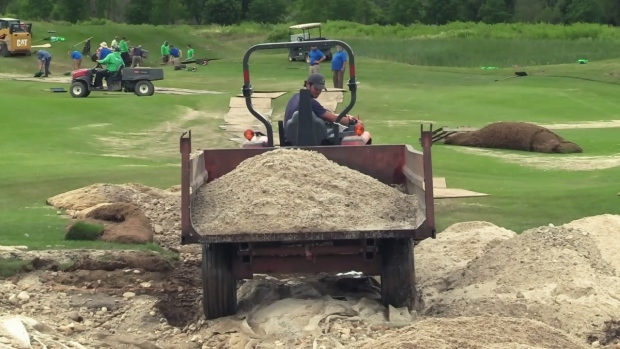 “We don’t really have a timeline yet on when we’re going to look at opening,” Winter said.

At Doon Valley, Doering still had his eye on the water levels. While the river had receded from its peak, he estimated that about one-quarter of the course was still covered.

“If the course has a chance to drain without any more rain, we should be able to open by Friday,” he said.

As of Monday evening, forecasts were calling for a 40 per cent chance of showers overnight and into Tuesday, with rain looking more likely for later in the week.

With reporting by Randy Steinman