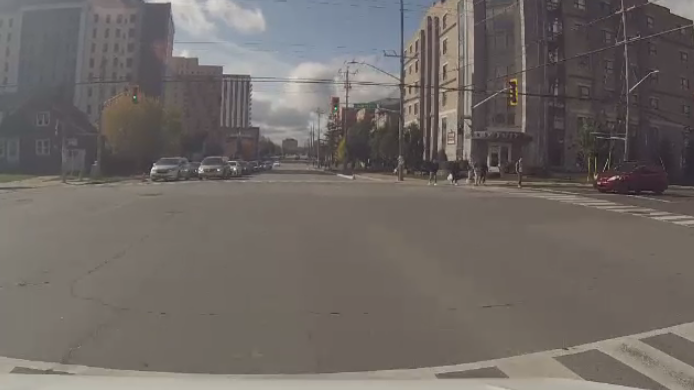 Four kilometres on University Avenue, including this stretch, are being considered as part of a new vision for the street.

WATERLOO – The City of Waterloo is looking to make a four-kilometre stretch of University Avenue less car-centric.

Parkettes, patios and art pavilions are some possibilities slated for the future stretch, the proposed gateway to the city.

Right now, almost 50,000 vehicles a day come into Waterloo on University from the expressway.

But city planners say it's too focused on cars: drivers speed, there are schools nearby, and it needs more green space.

"We know how much nature and being outside is important for kids and adults alike, so the more greenspace we can put into the community, I think, the better," says Jen Vasic.

Two years of consultations have resulted in a new vision: landmarks, public art and patios.

Conestoga College and the two universities make up 60 per cent of the area of this vision.

There are lots of students and the LRT to think about.

One commenter says University Ave. is too noisy for patios. Another says it's treated like a highway, because it's one of the few ways to get across the city.

Henry concedes that there will be compromise.

"You do have to make trade-offs when you're doing this," he admits.

It's an ambitious plan for University, but the city hasn't forgotten about lower-profiled roadways.

"We aren't looking at University Ave. in isolation of other streets," Vasic says.

"City staff are working across the city to make sure all streets are taken care of."

Henry says that the region is planning on redoing the stretch of road between Albert and Weber, meaning that a conversation around University Ave. is happening at the right time.

The plan for the vision has cost $136,000 so far. That tab is being picked up by the city, the region and the post-secondary institutions in the area.