Census 2016: Which local cities and neighbourhoods grew the most?

That’s one of the local revelations from 2016 census data made public Wednesday by Statistics Canada.

Others include Waterloo’s population moving into six figures for the first time, North Dumfries’ hitting the 10,000 mark, and two Perth County townships being the only local municipalities to see their populations fall from 2011 levels.

Statistics Canada focuses most of its analysis on census metropolitan areas, or CMAs – geographic areas which do not necessarily correspond to municipal boundaries.

By that measure, the Kitchener-Cambridge-Waterloo, Guelph and Woodstock CMAs saw higher population growth than either Ontario or Canada as a whole, while Stratford saw a smaller growth rate and the population of the Brantford CMA actually fell slightly.

Census data can also be broken down by municipality, which tells a slightly different story.

In Brantford’s case, the census found that the population of the City of Brantford itself actually rose from 93,650 in 2011 to 97,496 in 2016, while Brant County’s population increased by three per cent.

The fastest-growing neighbourhood in the region was Waterloo's university district -- south of Columbia Street, east of the University of Waterloo, west of King Street and north of the uptown core.

The population there grew by 147.9 per cent over the five years. Other fast-growing neighbourhoods include southwest Kitchener (60.8 per cent), and Kitchener east of Lackner Boulevard and south of Otterbein Road (45.5 per cent). 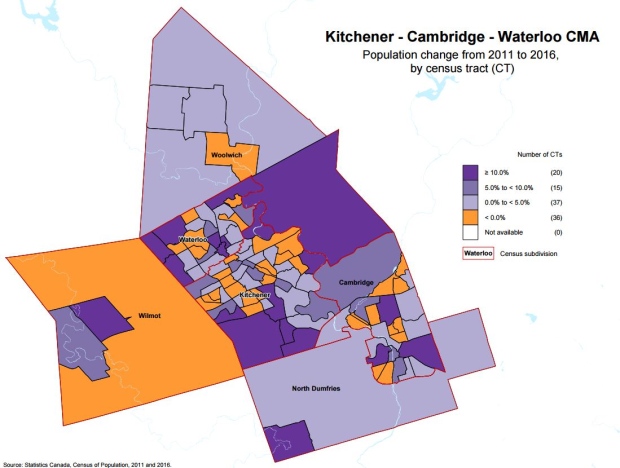 Guelph saw its population rise by slightly more than 10,000 people. The 8.3 per cent increase means that its official population now sits at 131,794.

Further down the Highway 401 corridor, Milton’s population grew by more than 30 per cent over the five-year period.

The growth wasn’t quite as robust in Wellington County, where Erin led the way with a 6.2 per cent population increase. Centre Wellington also outpaced the national average, as its population rose by 5.6 per cent.

Puslinch saw a 4.4 per cent increase, while the population jumped by four per cent in Minto and 3.8 per cent in both Wellington North and Guelph/Eramosa.

In Guelph itself, the highest rates of growth were seen in the neighbourhood bordered by Victoria Road, Eastview Road, Watson Parkway and Speedvale Avenue (72.4 per cent) and the downtown core (36 per cent). 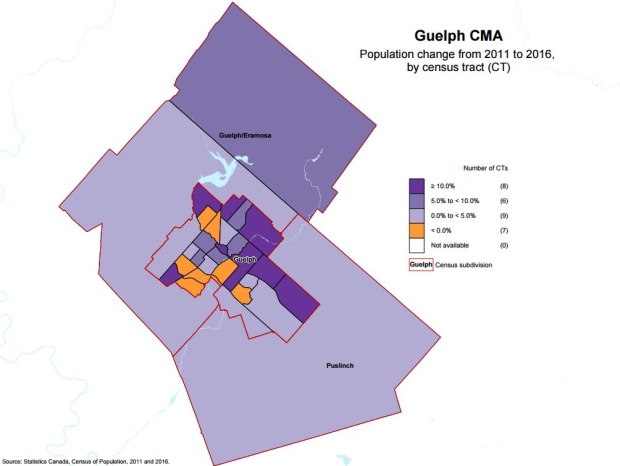 Woodstock’s population grew at the same rate as Guelph’s, with the result being a total of 40,902 residents.

Stratford was relatively low on the growth scale, with a 1.8 per cent increase bumping its population up to 31,465.

Other parts of southern Ontario to lose population between 2011 and 2016 include Owen Sound, Meaford, Sarnia, Chatham-Kent, Leamington, and rural areas around London and Sarnia.

Over the next year, Statistics Canada will release other data gleaned from the 2016 census, looking at everything from languages spoken across the country to education and income levels.

Highlights from the initial release of data from the 2016 census

Manitoba growth above national average for first time in 80 years

In Canada, dream of home ownership not so much far-flung as just far away