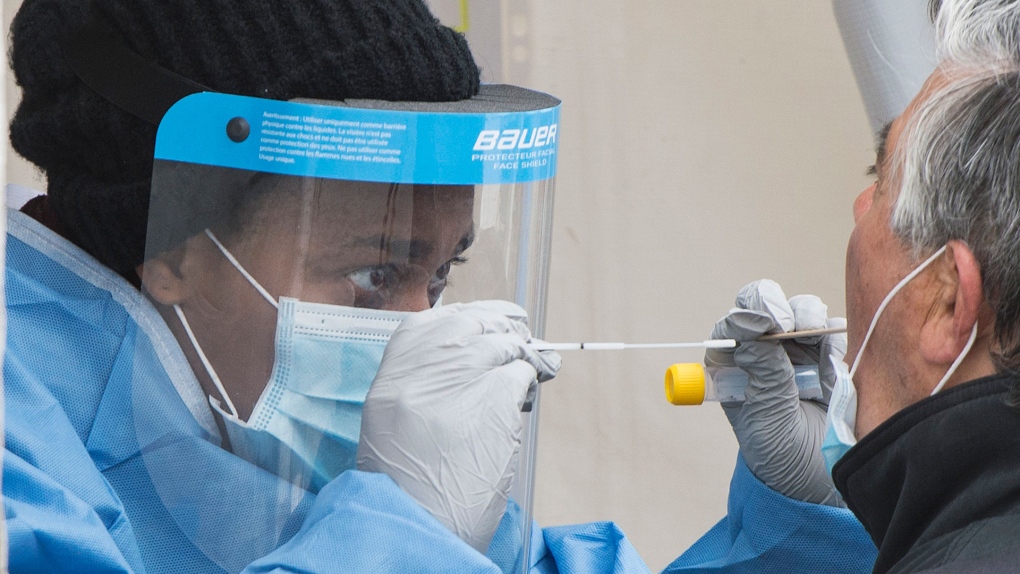 A health-care worker prepares to swab a man at a walk-in COVID-19 test clinic in Montreal North, Sunday, May 10, 2020, as the COVID-19 pandemic continues in Canada and around the world. THE CANADIAN PRESS/Graham Hughes

KITCHENER -- As more people get tested, the number of cases of COVID-19 in Waterloo Region continues to increase.

There are also four more resolved cases and no new deaths.

Testing numbers also continue to be encouraging: the region reported that another 633 tests had been done, bringing the total number of tests to 19,499.

"After several days of low numbers of new cases, we saw a bit of an increase yesterday," Acting Medical Officer Dr. Hsiu-Li Wang said during a Tuesday media briefing.

"This is what I thought might happen with the increased testing volumes that we've seen lately."

She said that public health officials have also found more cases in workplaces, which she said she suspects could happen more as more people return to work.

As for long-term care and retirement home outbreaks, one of the region's most significant active outbreaks has been declared over.

The outbreak was first declared at A.R. Goudie on April 10. Twenty-one staff and 21 residents contracted the virus there, resulting in nine deaths.

There are nine more outbreaks still active in the region. Forest Heights Revera LTC, which has been fighting an outbreak since the start of April, and has had 175 cases in residents, 69 cases in staff and 51 deaths.

The remaining outbreaks have cases in the single digits.

On Tuesday, the region reported one new active outbreak at a food processing facility, and one at a manufacturing or industrial facility.

It's not yet clear what facilities those are.

Across the province, Ontario reported 446 new cases of the virus along with 17 new deaths.

How safe is using a public restroom during a pandemic? Expert weighs in