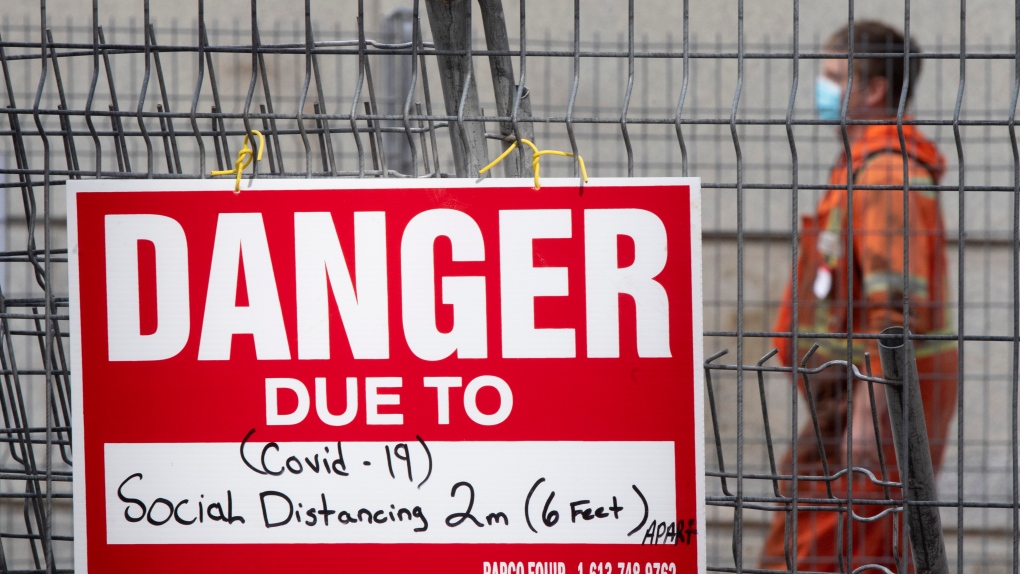 A construction sign on a fence surrounding an excavation indicates the danger of COVID-19 as a construction worker walks past Tuesday October 27, 2020 in Ottawa. (THE CANADIAN PRESS / Adrian Wyld)

KITCHENER -- Public health officials in Waterloo Region reported another 71 new cases of COVID-19 on Thursday, pushing the total number of cases over 3,800.

The region's online dashboard shows 62 cases on the most recent epi-curve date, but that number doesn't include cases that may have been added to  totals from previous days.

Region of Waterloo Public Health officials reported that an outbreak had been declared at Clemens Mill Public School. That outbreak was announced by school board officials on Wednesday after two students tested positive for COVID-19.

The total number of outbreaks remained at 24, however, as one in a construction setting was declared over.

The seven-day rolling average positivity rate remained at four per cent, while the reproduction estimate—or the number of new cases that are expected per case in the susceptible population—remained at 1.2.

CASES CONTINUE TO CLIMB ACROSS ONTARIO

The province reported more than 1,800 new cases of COVID-19 on Thursday, though health officials said the data may have been skewed because of a data processing error.

More than 600 people in Ontario are in hospital fighting the disease, including 195 patients in intensive care and 107 people who are breathing on ventilators.

The Ontario government said previously that if the number of COVID-19 patients in intensive care units surpasses 150, it becomes more difficult for hospitals to support medical needs not related to the disease. Indeed, Waterloo Region hospitals have already started pausing surgeries and non-urgent procedures.
If the number of patients goes over 300, the government says support non-COVID-19-related medical needs becomes impossible.

B.C. surpasses 9,000 active cases for the first time in the COVID-19 pandemic

Among first acts, Biden to call for 100 days of mask-wearing

'I'm the guy who is stealing Christmas': Pallister tells Manitobans to stay apart this holiday season

Would a curfew to curb the spread of COVID-19 in Toronto actually be effective?

WHO looks at possible 'e-vaccination certificates' for travel