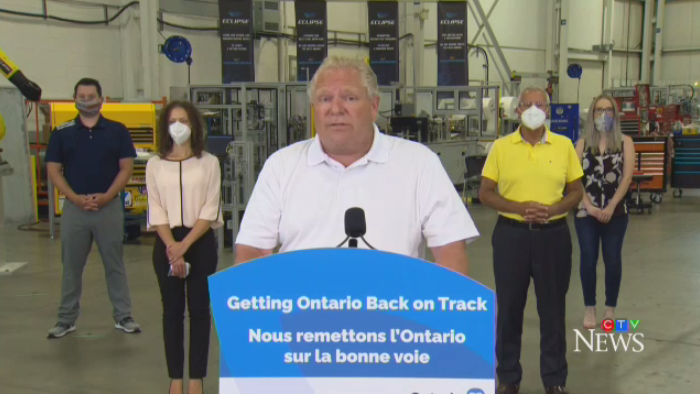 Premier Doug Ford at a media briefing in Cambridge on July 14, 2020.

KITCHENER -- Premier Doug Ford was in Waterloo Region on Tuesday, delivering his daily media briefing from a Cambridge manufacturer.

Eclipse Automation is the parent company of Eclipse Innovations, which pivoted early on to start manufacturing N95 masks.

Ford called the people at Eclipse "absolute champions" during his opening remarks.

"When I say amazing, it's just unbelievable what they do here," Ford said.

On top of making masks, the Cambridge robotics company also builds the machines to make the masks and is selling those to companies around the world.

Ford and Finance Minister Vic Fedeli announced Tuesday a $1.4 million investment in the company, which Ford said will help the company produce up to a million masks per week and fill 17 full-time jobs.

"Ontario will never, ever again be left at the mercy of other countries and other leaders when it comes to vital PPE and medical equipment," Ford said.

Eclipse has also partnered with Conestoga College on a program where masks can be fit using facial scanning technology.

It's not the first time that Waterloo Region's private sector has been given a nod during an official COVID-19 briefing.

Local start-up Trusscore was used as an example of a Canadian business fighting the pandemic by Prime Minister Justin Trudeau back in March, while local face shield manufacturer The Canadian Shield had 10 million face shields ordered by the federal government.

Ford's visit in Cambridge came as he announced an eight-week, cross-Ontario tour where he and his team will meet and speak to business owners who have pitched in during or been affected by COVID-19.

Critics have accused the premier of using the tour to campaign for reelection, something Ford's office denies. His reelection campaign began in February.

Premier Ford was also scheduled to visit Challenger Motor Freight in Cambridge and Shaver Industries in Kitchener on Tuesday.

Police notified of 21,422 cases where travellers to Canada may have broken quarantine rules

The hunt for a vaccine: Canadian company begins human testing of COVID-19 candidate

How deadly is COVID-19 for children? Here's what we know

Don't use fake exemption cards to get out of wearing a mask, feds warn Canadians