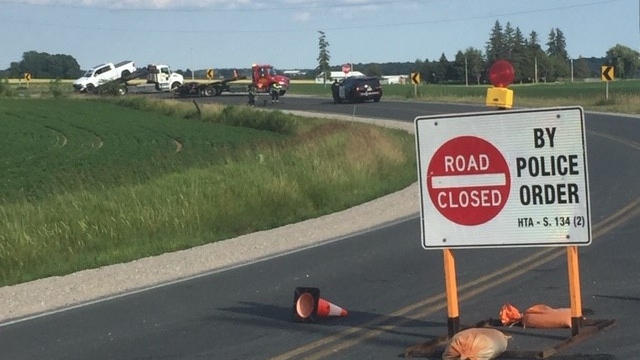 Tow trucks at the scene of a fatal crash involving a motorcycle and pickup truck on Gun's Hill Road near Woodstock, Ont. (Adam Marsh/CTV Kitchener)

Provincial police have identified the victim of a deadly motorcycle collision that occurred earlier this week.

According to police, the motorcyclist has been identified as 33-year-old Neal Daniel Whyte from Cambridge.

Police determined the motorcyclist was travelling northbound on Gunn's Hill Road and a pickup truck was travelling southbound when both collided head-on.

The driver of the motorcycle was ejected and suffered serious life-threatening injuries. They were transported to a local area hospital where they were pronounced deceased.

The driver of the pickup truck suffered minor injuries and also attended a local area hospital for treatment.

Gunn's Hill Road was closed at Oxford Road 14 for several hours on Sunday while officers continued to investigate.

The fatal film-set shooting of a cinematographer by actor Alec Baldwin last year was an accident, according to a determination made by New Mexico's Office of the Medical Investigator following the completion of an autopsy and a review of law enforcement reports.