'I needed to get them out': Cambridge woman alerts neighbours to house fire

'I needed to get them out': Cambridge woman alerts neighbours to house fire

A Cambridge family has been displaced after an early morning house fire, and they have their neighbour to thank for alerting them to the flames.

Araz Mardirosian smelled burning wood around 4 a.m. Thursday and then realized it was coming from her neighbour’s home on Patton Drive.

“There was a lot of smoke and there were flames building up on top, so I called the fire department and ran across to wake the family up,” Mardirosian told CTV News. “I knew they had small children so I needed to get them out. I was banging and yelling out: ‘Fire! Get out! You need to get out, there’s a fire.’ So I woke them up and got them out as fast as I could.”

Home security footage, from a nearby property, captured the moment Mardirosian ran across the street and started banging on the front door. 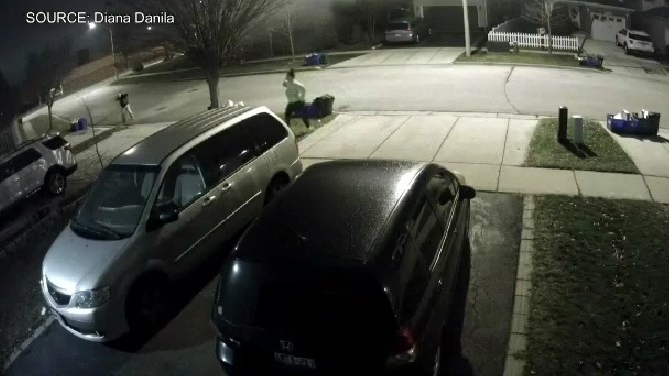 Araz Mardirosian can be seen in security footage running towards her neighbour's burning home on Patton Drive in Cambridge.

Neighbours tell CTV News a family of seven lives in the home and three of the children are under of the age of five. They also said the family moved to Patton Drive less than a year ago.

The homeowner, Rimsha Hasnain, said she heard people screaming and yelling there was a fire.

At the time of the fire, Hasnain was sleeping in the home with six of her relatives, including her two nieces and nephew, all under the age of 5.

“I just picked up one of the kids, and I ran outside,” said Hasnain

In the meantime, the Red Cross has offered the Hasnain family temporary housing for the next two days before they’ll need to find a new place to stay.

The family told CTV News that it could be months before they can move back into their home, meaning they’ll have to find somewhere else to spend the holidays.

The family said their home did suffer extensive damage, which they hope will be covered by insurance.

“Everybody safe that’s all that matters,” said Hasnain. “It was just all very scary but everybody was there for us.”

Investigators have yet to determine the cause of the fire but confirm it originated in the third-floor bathroom.

“We are so grateful for our residents that have looked out for their neighbours due to this emergency,” said John Percy, captain of fire prevention with the Cambridge Fire Department. “Typically at 3 o’clock in the morning, most of us are fast and in a deep sleep. They did everything they could to get the people out.”

The fire department tweeted that everyone who lives in the home escaped unharmed.