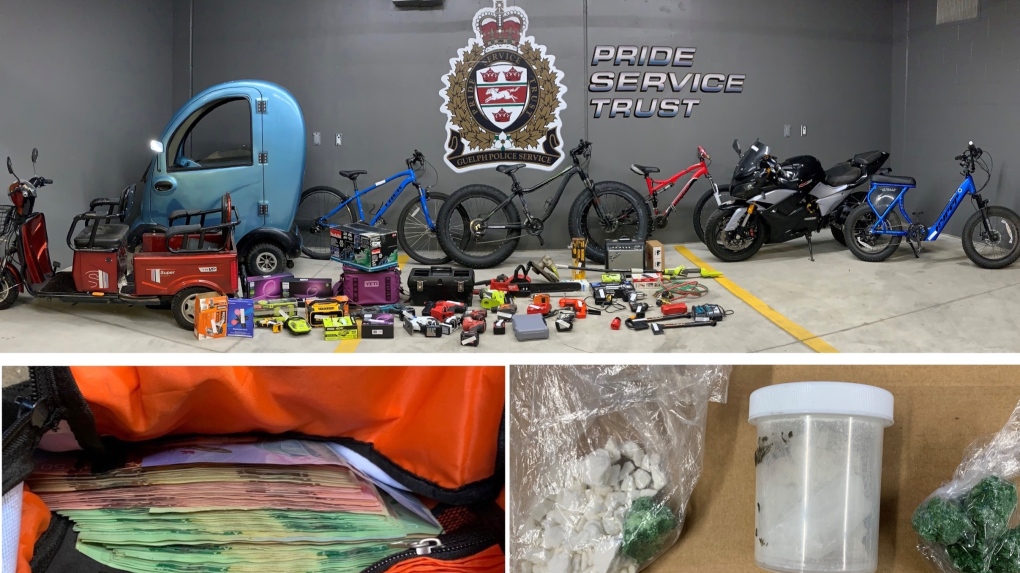 Earlier this month, the Guelph Police Service Break Enter Auto Theft Unit (BEAT) began an investigation into a Guelph man who was believed to be trafficking stolen property.

On Thursday, a search warrant was executed at a residence in the area of Willow Road and Edinburgh Road North.

During the search, officers say they seized more than $18,000 in controlled substances including fentanyl and crystal methamphetamine. Officials also say they found more than $20,000 in cash and thousands of dollars in stolen property including high-end bicycles, e-bikes and power tools.

A Guelph man is charged with possession of stolen property over $5,000, trafficking in stolen goods, breaching a conditional sentence order and four counts of possessing controlled substances for the purpose of trafficking.

BREAKING | Arrest made in gruesome 1983 murders of 2 Toronto women

A former employee of Quebec's power utility who is charged with spying on behalf of China was granted bail Monday while he awaits trial.

The white gunman who massacred 10 Black shoppers and workers at a Buffalo supermarket pleaded guilty Monday to murder and hate-motivated terrorism charges, guarantying he will spend the rest of his life in prison.

Why organ donations are declining and how governments are reacting

Ontario and Nunavut opted into new legislation by the federal government hoping to increase organ donations as hundreds of patients die while on the waitlist each year.

Wouldn't it be nice to never have to work again? While this may sound like a dream to many, it is entirely possible. CTVNews.ca personal finance contributor Christopher Liew shares a handful of helpful tips on how to potentially achieve financial independence.

Prime Minister Justin Trudeau will visit a First Nation in Saskatchewan that was rocked by a deadly stabbing rampage nearly three months ago.

WHO renames monkeypox as 'mpox'

The World Health Organization announced Monday that 'mpox' is now the preferred name for monkeypox.