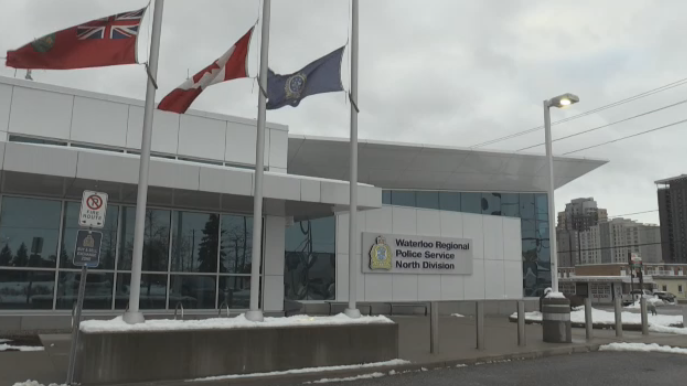 Flags were lowered to half-mast at all WRPS divisions to honour Const. Marc Hovingh who was killed in the line of duty.

KITCHENER -- The flags at Waterloo Regional Police Service headquarters were lowered Monday to honour a provincial police officer who was killed in the line of duty last week.

Const. Marc Hovingh died Thursday after an incident on Manitoulin Island that also resulted in the death of a civilian.

Hovingh and another officer were responding to a call about an unwanted man on a property.

The province's special investigations unit says Hovingh died in hospital following an exchange of gunfire with a suspect, who also died.

The body had been brought to Toronto for an autopsy, and on Monday a six hour procession took the body of the 28 year veteran of the force back to Manitoulin Island where he served 21 years.

The 52-year-old is being remembered as a role model to both officers and community members.

Hovingh's funeral is planned for Saturday by invitation-only.

Flags will remain lowered to half-mast at all WRPS divisions until Tuesday morning.

Paying our respects to OPP Constable Marc Hovingh as his body is escorted from Toronto to Manitoulin Island.

Our thoughts and condolences are with his family, friends, colleagues, and community. #HeroesInLife pic.twitter.com/InIIBns8T4