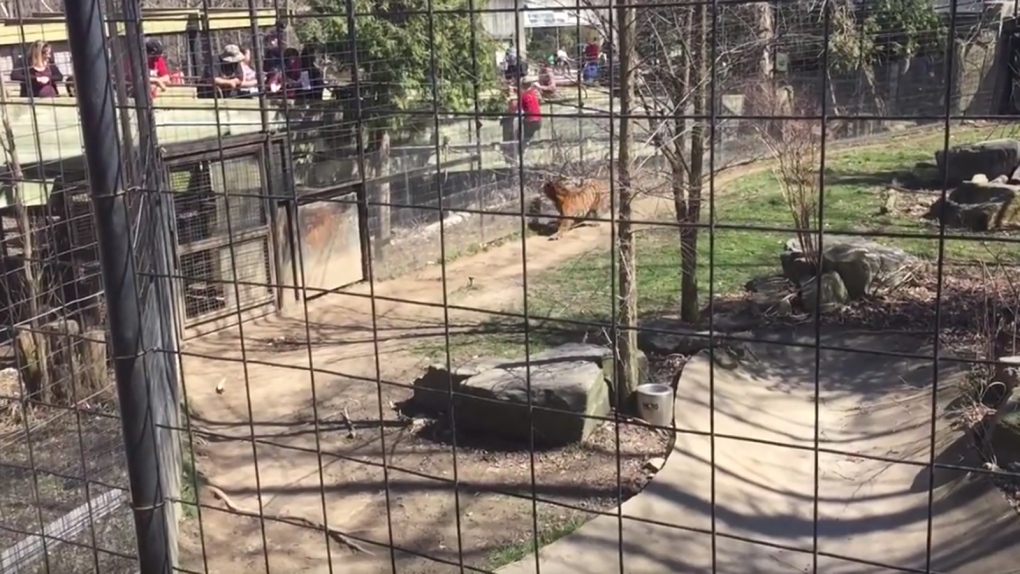 In this screengrab, a woman is seen climbing back over a fence at the Toronto Zoo's tiger exhibit. (Jared Sales / YouTube)

Toronto Zoo officials are investigating after a video surfaced that shows a woman jumping over the first of two fences that separate zoo-goers from Sumatran tigers.

It appears the woman hopped the barrier to retrieve a hat.

The video, which was posted to YouTube on Saturday, shows a tiger pacing back and forth -- clearly agitated, a zoo representative said -- on the other side of the interior fence.

Zoo representative Jennifer Tracey said that because of the interior barrier, the woman wasn't in any danger from the tiger, but that she could have otherwise injured herself.

"At no time would she have come into contact with the tiger," Tracey said. "She easily could have broken an ankle from jumping over."

In the video, someone can be heard saying, "She jumped in front of it like a moron!"

"You're a bad example for everyone else's kids," someone else told the woman.

This isn't the first time the zoo's Sumatran tigers have made the news: in 2011, one of the rare tigers was mauled to death by her mate.

According to the zoo's website, there are only about 350 Sumatran tigers left in the wild.

Tracey said that staff were away from the tiger pen at the time, but that if a visitor drops an item in restricted areas, he or she should find a staff member and ask for help.

"The barriers are there for a reason. They're not only there for the visitors, but they're also there to protect the animals in our care," she said.

Tracey added that when other guests witness someone jumping over barriers or behaving recklessly, they should also tell zoo staff. In this case, she said, staff weren't notified of the incident until hours later, and they haven't been able to find the woman from the video.