What are the key issues in the Ontario teachers' disputes with the province? 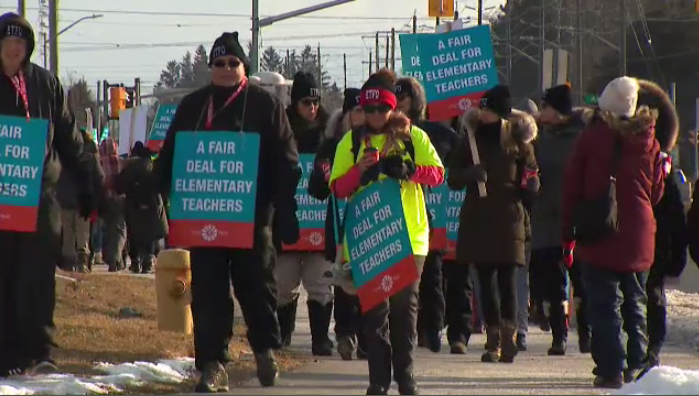 TORONTO -- Ontario's high school, elementary, Catholic and French teachers have been without a contract since Aug. 31 and months of negotiations between their unions and the province have yielded few signs of progress. Here are the key issues:

Elementary and secondary teachers are largely focusing on different concerns, but compensation is one issue they have in common. Teachers are seeking salary increases of around two per cent a year, which they call a cost-of-living increase to keep pace with inflation. But the government is not budging beyond offering a one-per-cent increase per year. In fact, it has made that figure the law. Last year, the Progressive Conservative government passed legislation to cap increases for all public sector workers at one per cent for three years. The unions are challenging the law in court, arguing it violates collective bargaining rights by bypassing the negotiation process. The government maintains that with public sector salaries making up a substantial portion of government spending, it's a necessary measure to tackle the provincial deficit. Giving all of the unions two per cent in salary -- instead of one -- and increases in benefits would cost $1.5 billion over three years, according to government figures.

The government announced last March it would increase average high school class sizes from 22 to 28 over four years. It was to be achieved largely through attrition, but according to calculations by the province's financial watchdog, it would also mean 10,000 fewer teachers in the system. That also included an average class size increase of one student in Grades 4 to 8. This fall saw boards inch toward that 28-student target, with a provincewide class size average of 22.5. That has already led to schools being able to offer hundreds of fewer courses. The government has since partially backed down, setting a new average class size of 25. But the Ontario Secondary School Teachers' Federation says that's not good enough. The education minister has recently said he is willing to be more flexible on class sizes than on compensation. President Harvey Bischof has also said the government's compromise comes with a "poison pill," because the offer would also mean local class size limits are removed, essentially allowing the province to see the number of students per class climb indefinitely.

As part of the same March announcement, the government said it would start requiring high school students to take four of their courses online in order to graduate. Educators and school boards alike raised concerns about students not having uniform access to technical resources and broadband infrastructure, also noting that e-learning is not an appropriate teaching method for all. Education Minister Stephen Lecce has since announced he would scale the e-learning requirement back to two courses, and that individual exemptions would be allowed. The teachers don't want any online courses to be mandatory.

The Elementary Teachers' Federation of Ontario has been looking for a guarantee that full-day kindergarten will be protected, after the previous education minister would only guarantee its future for another year. Lecce has publicly said he is committed to the current one-teacher, one-early childhood educator model, but ETFO president Sam Hammond has said government negotiators haven't said the same thing at the bargaining table. Lecce said the government put that commitment in writing during the most recent talks with ETFO. Hammond said it was not language that could be included in a collective agreement, but was shared with the union in a letter away from the bargaining table. Lecce maintains there is precedent for including such a letter in a collective agreement.

A 2012 rule dictating seniority requirements for hiring supply teachers into permanent positions has come up during these negotiations. ETFO wants the regulation maintained, saying it establishes fair and transparent hiring practices, and without seniority rules nepotism and favouritism are hiring factors. ETFO has said the government wants to "gut" the rule. Lecce has not clearly said either way what he wants to see happen, but he has spoken publicly about the need for qualification and merit to trump seniority.

ETFO wants the restoration of a local priorities fund the then-Liberal government introduced in the 2017 collective agreement. That is something the government agreed to for the education workers represented by the Canadian Union of Public Employees -- the only major education union to reach a deal so far. It will help restore jobs for education assistants working with students with special needs, clerical workers and custodians. ETFO wants its funding continued so special education staff can be hired, but the union says the government is offering 40 per cent of what was in the last deal.

The Ontario English Catholic Teachers' Association, as well as the union representing teachers in the French system, have members at both the elementary and secondary levels and have expressed concerns about many of those issues.

This report by the Canadian Press was first published Feb. 21, 2020.