'We will remember Tim': Sharlene Bosma

Through tears, Tim Bosma’s wife called Tuesday “the most horrifying day of my life.”

Sharlene Bosma spoke to the media Wednesday afternoon at a news conference, one day after police charged Dellen Millard with first-degree murder in the death of her husband.

“As a family, with our friends and our community, we will remember Tim,” she said.

“His daughter will grow up knowing how much he loved her.”

Bosma expressed gratitude to the thousands of Canadians who have kept the case in the public eye and supported the Bosma family over the past nine days.

“Your social media postings, your hours spent volunteering, your food, your flowers, the cards and your prayers – these speak volumes to us,” she said.

Bosma’s statements came on the same day as news that the suspect in her husband’s death intends to plead not guilty to first-degree murder.

Millard was formally charged during a brief appearance in a Hamilton court Wednesday morning.

He was seen to be listening attentively and only spoke to say his name.

Millard, who had previously been charged with forcible confinement and theft over $5,000, remains in custody and will next appear in court via video-link June 13.

His lawyer, Deepak Paradkar, says there is more to the story than what has been reported thus far.

“There is a story behind this which I can’t get into," Paradkar said outside the court.

"Obviously it’s more than it appears to be. We’re really waiting for the police investigation to be completed.”

Tim Bosma, 32, was last seen at his Ancaster home May 6 when he left with two men who had asked to test-drive a truck he was selling.

Police say they believe Bosma was murdered later that night. His cellphone was found in Brantford, and his burned remains were found in Waterloo Region.

Bosma’s truck was later found in a storage trailer near Vaughan.

Police say they have interviewed and released several people, but have yet to identify the suspect who accompanied Bosma.

The suspect is described as white with a medium build, 5’9” with dark hair and wearing a red hooded sweatshirt.

Additionally, police believe a second vehicle followed Bosma’s truck from Ancaster, but no information is known about the vehicle or its occupants.

Investigators remain on the scene of a hangar at the Region of Waterloo International Airport and a farm property on Roseville Road south of Kitchener, both of which belong to Millard or his business, charter airline Millard Air.

A makeshift memorial has been set up outside the farm with flowers and candles left in Bosma’s memory.

A tip line has been set up at 905-546-2100, and police say information continues to be left with police every day.

A bank account to make donations to Tim Bosma’s family has been set up at TD Canada Trust.

Donations can be made in person, via telephone or online. 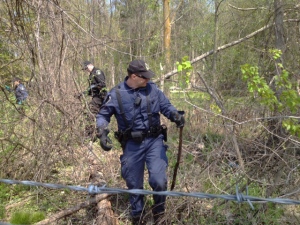 See photos from the police search of a farm property owned by Dellen Millard.