The Waterloo Regional Police Service (WRPS) has a new chief.

Mark Crowell was officially sworn in as the service’s 7th chief of police during a ceremony Thursday afternoon in a downtown Kitchener hotel with hundreds in attendance.

“It’s the greatest honour and privilege for me to represent our members, to serve as an ambassador for over 1,200 dedicated members and volunteers,” said Crowell. “It’s just an immense privilege.”

In a ceremony, his father Gary Crowell, a former chief of police in Halton presented him with his new badge.

“I’ve celebrated him throughout his career ,and we have sort of interloped over time, so it’s very touching to have family here,” said Crowell.

The badging ceremony between chiefs was Ontario’s first involving father and son, making the moment that much sweeter, according to WRPS. 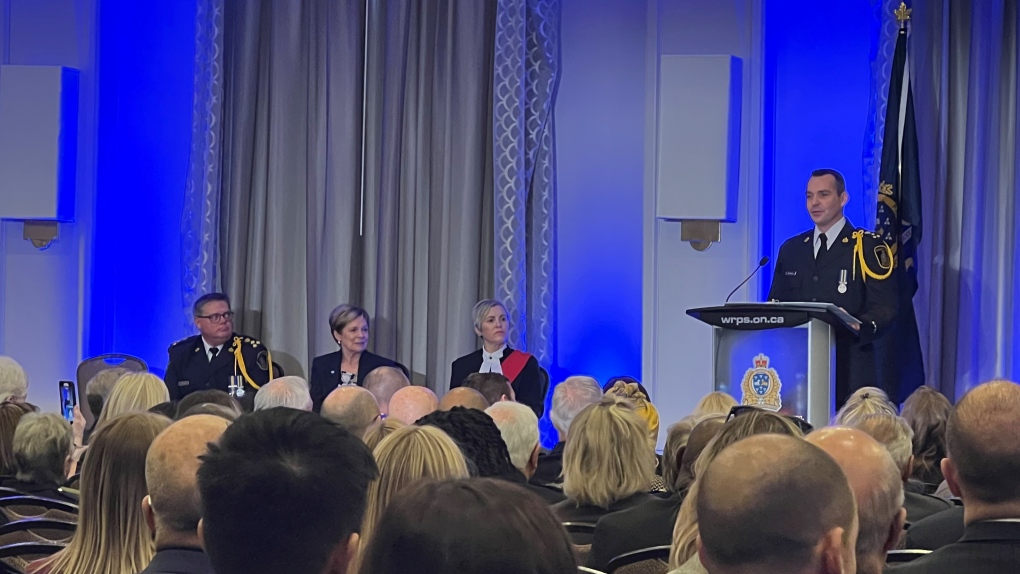 Mark Crowell was officially sworn in as the service’s 7th chief of police during a ceremony Thursday. (Carmen Wong/CTV News)

“IT was an honour to present that to him and be here and be part of the ceremony,” said Crowell’s father. “I guess there’s not a lot of fathers and sons that directly follow in another's footsteps."

Crowell served with WRPS for 22 years, most recently as deputy chief of police for administration and member services. Prior to that, he served as an inspector as well as executive officer to the chief of police.

Karen Redman, a member of the region’s police board said Crowell was among “a strong field of candidates and Mark was unanimously chosen from the board.”

“[It's a] very proud occasion. We only had three other chiefs over the last 30 years, so it’s quite a monumental step for our organization,” said Crowell.

In terms of calls to dismantle systemic racism in policing, Crowell said he believes working together is the best way to find solutions.

“We’re working collaboratively with partners to offload any demands from our service. We’re at the table and ready and willing to embrace those challenges and those changes,” he said.

“Today is about celebration and recognition, but then it’s down to getting to work," said Crowell.

Larry Gravill, a former regional chief of police, was the one who hired Crowell ,and he said even back then, it was clear he was a leader and community builder.

“He had that spark of understanding about community. He cared about the community and truly wanted to serve the community,” said Gravill.

“We want to get a handle on the issue of the growth of violent crime in our community, and certainly, there’s a budget season coming up, where we want to find balance and really try to meet resource demand for our service and balance all other demands in our community,” said Crowell.

Justice Minister David Lametti says he will "look at" a federal policy that restricts gay and bisexual men from donating to sperm banks in Canada, after CTV News exclusively reported on Wednesday that a gay man is taking the federal government to court over it.