An incurable disease brought people together in Kitchener on Sunday to spread awareness, raise money, and promote hope.

Dozens of people with red shirts and flowers pinned to their chest marched around Steckle Heritage Farm in the annual Multiple Myeloma March.

Multiple myeloma is the second most common form of blood cancer. Stem cell surgery is the standard treatment for the disease, along with chemotherapy, which can last from four to six months. The number of Canadians living with myeloma is on the rise, and advocates are calling for more research and better access to life-saving treatments and care.

“Every year, we’re getting closer to finding a cure,” says Martine Elias, executive director of Myeloma Canada. “That’s why the funds raised at the Kitchener-Waterloo Multiple Myeloma March are so critical. They help to keep myeloma research moving forward and to improve the lives of Canadians impacted by this devastating disease.”

Some participants know first hand what it’s like to live with the blood cancer.

“I was definitely shocked and surprised because no one in my family has myeloma. We have other cancers, but this is the first I ever heard what that cancer was and what it could even possibly be,” said Janene Sarabura, who is currently in full remission.

Support group organizer and myeloma patient Susan McDowell says she’s glad to be out and about with others instead of Zoom calls.

“Everybody’s had the same challenges with COVID because myeloma patients are typically immunocompromised. We’ve really struggled with that but I think the community has been able to connect strongly.”

McDowell was diagnosed in 2016 and after getting stem cell surgery, she relapsed in 2019. She is now in full remission.

“We know we’re going to relapse and that’s one of the things. The research is looking for longer remission periods and moving towards a cure,” explained McDowell.

Organizers were hoping to raise $20,000 and shining a spotlight on other advancements.

Rapid Novor, a local bio-tech company and top fundraiser for the event, was on hand to share their work on the medical front. 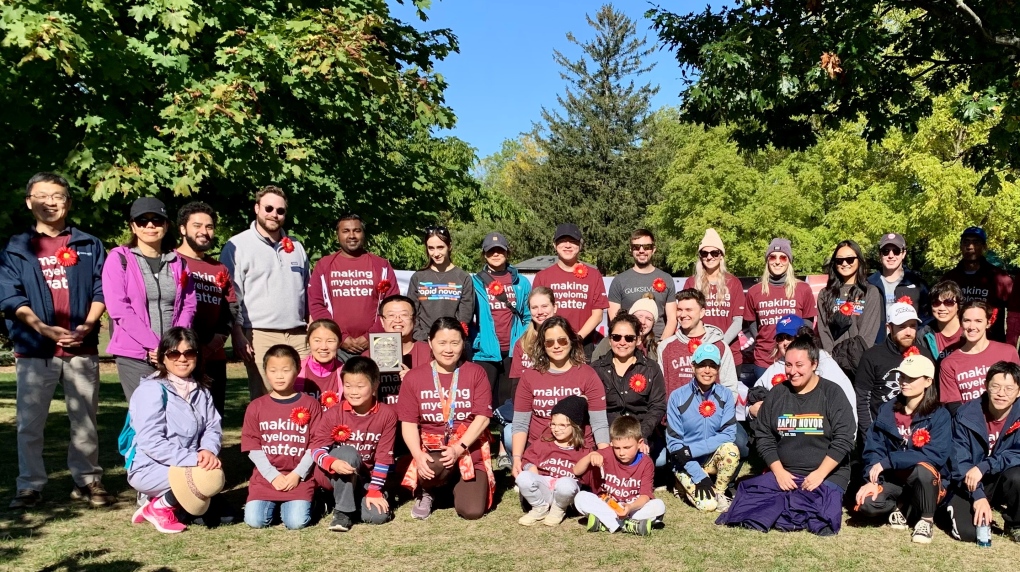 Rapid Novor, a bio-tech company, is the top fundraiser for this event. “Essentially, we’re developing a test called Easy-M that is not invasive and very sensitive,” said Mingjie Xie, co-founder of Rapid Novor.

Their diagnostic blood test is currently in a pre-trial stage and they’re hoping to get it to market in a few years.

The co-founder says bringing out company employees helps them see who they are trying to help.

“I feel just talking with people in the community, so that we have a sense of how important our work is and how we can help patients, is very important.”

Kitchener-Waterloo is one of more than 34+ communities across Canada participating in the event. Nationally, Myeloma Canada’s March aims to raise $750,000.