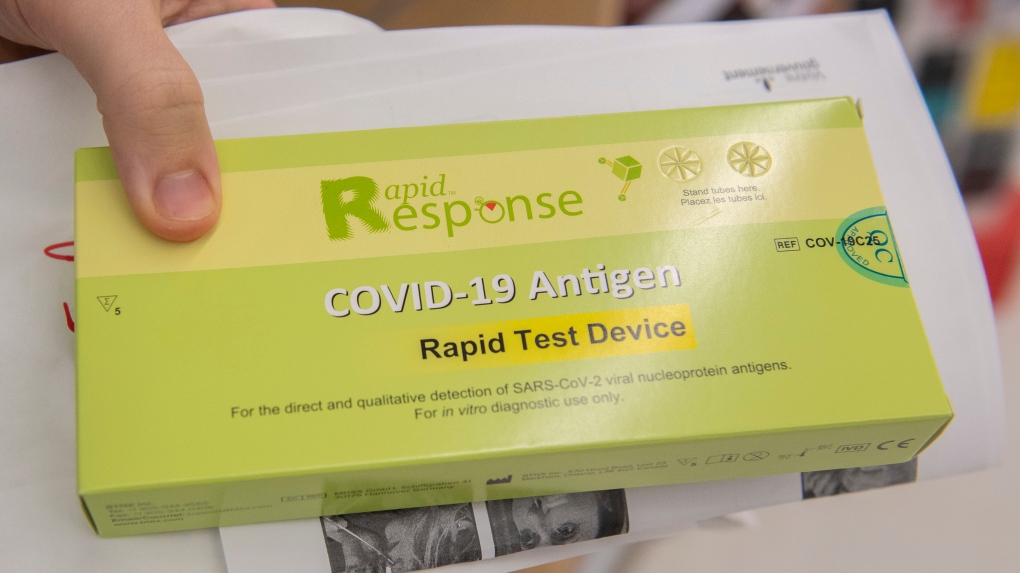 A man displays his COVID-19 rapid test kit after receiving it at a pharmacy on Monday, December 20, 2021. THE CANADIAN PRESS/Graham Hughes

Elementary students across Waterloo Region who are attending in-person learning will be coming home with a pair of rapid tests this week.

During a virtual announcement, Minister of Education Stephen Lecce re-iterated the province’s staged plan to distribute the rapid antigen tests to all staff and students over the next few weeks.

"Our boards are sending out rapid tests to students this week adopting that approach," said Lecce. "The prioritization is for elementary students and staff, as well as child care settings. With another shipment of rapid tests coming into the province from the federal government for high schools. That’s always been the plan. A staged approach."

Officials from both of Waterloo region’s largest publicly funded school boards said staff have had to take extra time in the past few days to 'de-kit' each package. Rapid antigen test kits come with five tests, but students will only receive two to take home.

"De-kitting takes a little bit of time trying to break them down, and then making sure they are safely handled, they are safely stored and they are safely transported," said jeewan chanicka, director of education at the Waterloo Region District School Board.

chanicka said WRDSB "is aiming for all our elementary students and staff to receive their tests by Friday, and there may be some getting them on Monday."

He added the WRDSB is waiting on the secondary shipment for secondary students.

The head of the local catholic board echoed a similar timeline.

A notice sent home to WCDSB families said rapid tests are temperature sensitive, so parents are being asked to remove them from their child’s backpack as soon as possible.

Officials have previously said 3.9 million rapid antigen tests are expected to be handed out to schools province-wide this week, with an additional 1.2 million the week of Jan. 24.

Conservative MP Ed Fast said it was becoming 'untenable' to do his job as finance critic within the Conservative Party of Canada, which is why he asked to be relieved of his duties.

An independent group should review the use-of-force policy that guides New Brunswick police to ensure it is concise and understood by all officers in the province, a coroner's jury recommended Thursday.