Water back on in Kitchener neighbourhood after watermain repair

Water back on in Kitchener neighbourhood after watermain repair 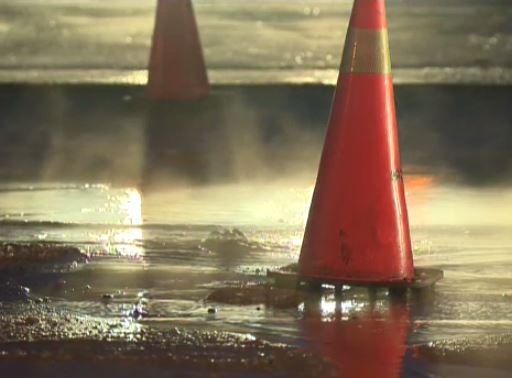 The Region of Waterloo says about 500 customers were without water Tuesday night as crews worked to fix a watermain break on Howe Drive in Kitchener.

Around 7:45 a.m. on Wednesday, the region said the watermain had been repaired water was restored to the neighbourhood.

UPDATE: Water has been restored and the Howe Drive watermain in Kitchener has been repaired. If you turn the taps on and find that your water is discoloured or milky, run the cold water tap nearest your water meter until it clears. https://t.co/9qAVaZkb1x pic.twitter.com/MOwhZ5nwUC

The region warned that when turning the taps back on the water could be discoloured or "milky." They advise running the cold water tap closest to the water meter for several minutes until it runs clear.

Ontario Premier Doug Ford says through his throne speech that more can be done to ease health system pressures, but is not yet offering up any new solutions.

Former U.S. President Donald Trump on Tuesday tried to turn the news of an FBI search of his Florida estate to his benefit, citing the investigation in text messages and emails soliciting political donations from his supporters.

Tracking active wildfires around the world

opinion | Tom Mulcair: Why Pierre Poilievre's plan to work with provinces to reduce barriers is a good idea

The serious shortage of nurses and doctors has put the spotlight on a long overdue reform to the rules governing entrance requirements for foreign-trained professionals, says former NDP leader Tom Mulcair in an exclusive column for CTVNews.ca.

TripAdvisor ranks the best Canadian excursions, according to travellers

TripAdvisor has ranked the best excursions in Canada, according to travellers. The activities include driving an ATV through the wilderness of B.C., exploring snow-blanketed caves in Alberta, and whale-watching in Newfoundland and Labrador.

For the first time in eight years, Canadian warships are not involved in either of two NATO naval task forces charged with patrolling European waters and defending against Russian threats.