Vehicle catches fire after being stuck in snow: Waterloo Fire 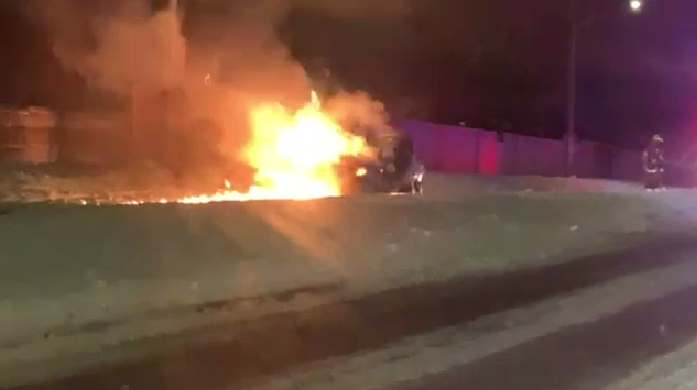 A vehicle is being considered a total loss after it reportedly caught fire near a busy Waterloo intersection.

They said the driver had been stuck in snow, was able to get moving, continued down the road, and was alerted by a transit bus driver his vehicle was on fire.

The driver reportedly pulled over and was not injured.

Fire crews put out the fire, said it's a total loss, and estimated the damage cost is around $2,000.

The roads around were closed by regional police so firefighters could access a hydrant.

There will be no investigation into what caused the fire.

UPDATED | Ont. and Que. scramble to recover from thunderstorm that left at least 8 dead

Clean-up efforts are underway after a massive thunderstorm on Saturday left a trail of destruction in Southern Ontario and Quebec.

The storm that moved across Ontario and Quebec Saturday is known as a “derecho”, a powerful kind of windstorm that is long lasting and far-reaching.

A military plane carrying enough specialty infant formula for more than half a million baby bottles arrived Sunday in Indianapolis, the first of several flights expected from Europe aimed at relieving a shortage that has sent parents scrambling to find enough to feed their children.

Russia pressed its offensive in eastern Ukraine on Sunday as Poland's president traveled to Kyiv to support the country's European Union aspirations, becoming the first foreign leader to address the Ukrainian parliament since the start of the war.

New York's highest court is set to determine whether Happy, a 47-year-old Asian elephant living at the Bronx Zoo, is being unlawfully imprisoned.

Meet the guy who wants to help save the planet with thousands of buoys, seaweed and giant antacids

Seaweed is a ravenous consumer of carbon dioxide, and scientists have been eyeing it as one potential solution to the climate crisis.