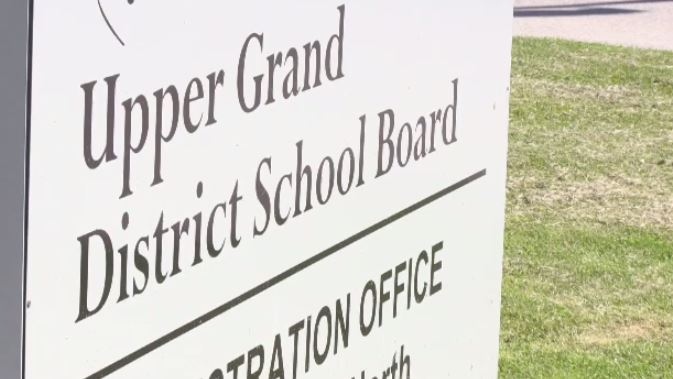 A sign at the Upper Grand District School Board offices is seen here. June 16, 2020.

KITCHENER -- Upper Grand District School Board trustees decided to defer looking into the issue of police officers in schools.

Tonight, MacNeil tabled a motion with seven recommendations.  Among the recommendations are to set up a task to review police presence in Upper Grand District School Board schools, and to look into the issue, reporting back no later than December of this year.

But trustees took exception to the motion and the recommendations.

Student Trustee Amelia Luff, who represents rural schools and attends Erin District High School, asked whether Indigenous or coloured students should be included in the task force, since they were part of the original motion.  MacNeil noted that it was a good suggestion.

Other trustees had other issues.

Robin Ross, who represents the Township of Wellington North, the Town of Minto and the Township of Mapleton pointed out that the motion only mentions Guelph Police and the board is larger than Guelph.

“You want me to vote for a task force that only says Guelph.  It doesn't seem like something I can do right now because the people in my area have asked me many questions about 'why does it just say Guelph?" said Ross.

Trustee Linda Busuttil said she couldn’t support the motion because, in part, it wasn’t brought to the Chair’s Committee, “given the earlier presentation about transparency and information and everything else, I find, for me, there are too many unanswered questions.”

The issue will be brought back to next week’s school board meeting.