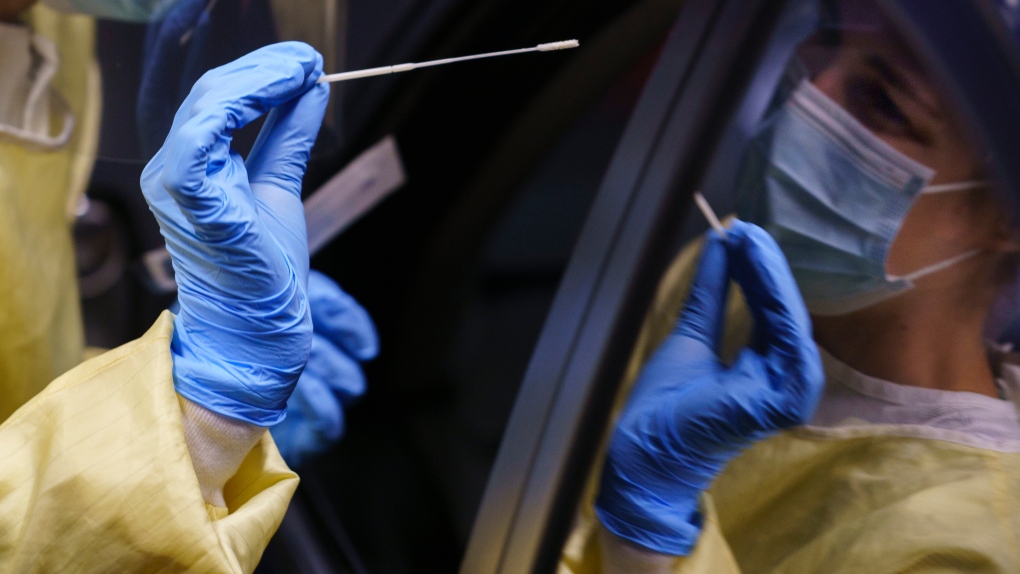 A nurse performs a test on a patient at a drive-in COVID-19 clinic in Montreal, on Wednesday, October 21, 2020. (THE CANADIAN PRESS/Paul Chiasson)

WATERLOO -- Two more people in Waterloo Region died from COVID-19 in the past 24 hours as health officials report 57 new cases – the third highest daily increase among health units in the province.

A total of 258 people in the region have died of the disease since the pandemic began. The two latest deaths are the first in the region in more than three weeks.

Hospitalizations in Waterloo Region jumped by seven in the past day, up from 27 people to 34. Of those, 20 are receiving treatment in area intensive care units.

There are now five active outbreaks in the region.

Another 20 COVID-19 cases were identified as variants of concern. At least 3,390 cases in Waterloo Region have been confirmed as variants.

The variant breakdown is as follows:

3,003 are the B.1.1.7 variant first identified in the United Kingdom, now known as the Alpha variant

Seven are the B.1.315 variant originally detected in South Africa, now referred to as the Beta variant

60 are the P.1. variant initially discovered in Brazil, now called the Gamma variant

13 are the B.1.617 variant first found in India, now dubbed the Delta variant

Meanwhile, health partners in Waterloo Region administered another 7,492 COVID-19 vaccine doses on Tuesday, bringing the total number of jabs in arms to 375,549.

More than 69.8 per cent of adults in the region have received at least one dose, and more than seven per cent of those 18+ are fully vaccinated.

Across Ontario, health officials logged fewer than 500 new cases for the second day in a row. Another 411 new infections were recorded Wednesday, along with 33 deaths.

Eleven of those deaths occurred in April or May.

The seven-day rolling average of daily reported COVID-19 cases continues to decline and now stands at about 657 down from 978 a week ago.

With files from CTV Toronto.