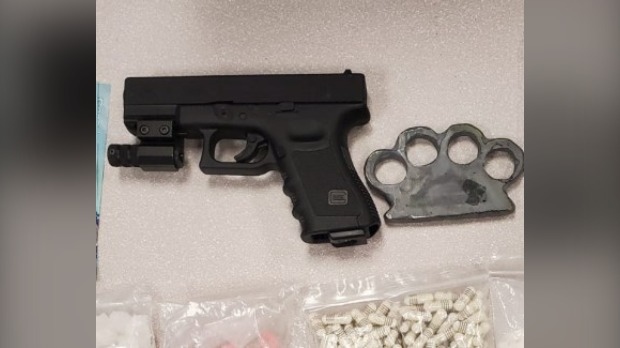 An air gun and brass knuckles seized by police are seen in a handout photo. (Submitted/Waterloo Regional Police Service)

Two people have been arrested after police seized weapons, cash and around $10,000 worth of drugs during a traffic stop in Kitchener.

In a media release police said officers stopped a vehicle in the area of Weber Street East and Highway 8 around 11:40 p.m. on Friday, June 24.

Police seized an air gun, brass knuckles, cash and around $10,000 worth of drugs, including suspected methamphetamine, fentanyl, cocaine and numerous prescription pills.

The pair were jointly charged with 25 criminal offences, including:

A fire ripped through a packed Coptic Orthodox church during morning services in Egypt's capital on Sunday, quickly filling it with thick black smoke and killing 41 worshippers, including at least 10 children. Fourteen people were injured.

'Fanaticism is a danger to free expression everywhere': Ignatieff on Rushdie attack

After Indian-born British novelist Salman Rushdie was attacked during a writing conference in western New York on Friday, current and former Canadian politicians are weighing in on what such attacks mean for freedom of expression and thought.

Salman Rushdie 'on the road to recovery,' agent says

Salman Rushdie is 'on the road to recovery,' his agent confirmed Sunday, two days after the author of 'The Satanic Verses' suffered serious injuries in a stabbing at a lecture in upstate New York.