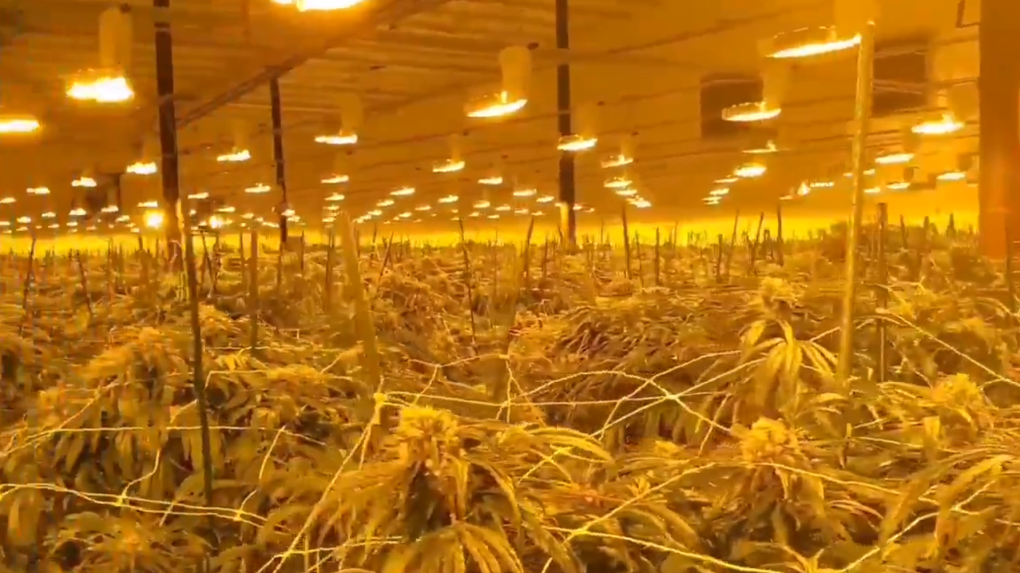 A room that police said was filled with hundreds of cannabis plants. (@OPP_WR / Twitter)

KITCHENER -- Three people are facing a number of charges after a huge number of cannabis plants were seized from a Simcoe, Ont., address on Wednesday.

The Ontario Provincial Police in Haldimand and Norfolk County were joined by a number of other police services to carry out a search warrant.

Police said they seized about $796,000 in cannabis plants and another $20,400 in processed cannabis. Three people were taken into custody without incident.

In a video posted on Twitter on Wednesday, Const. Ed Sanchuk appeared to be standing in a warehouse of some kind, surrounded by "hundreds of marijuana plants."

Sanchuk said that the search warrant was carried out because of "ongoing community complaints."

All three are charged with "possession of cannabis for the purpose of selling and cultivate, propagate or harvest cannabis plant at a place that is not their dwelling house," a news release said.

"What you need to realize is that the plants that are grown outside of provincial and federal legislation often times go back into funding organized crime," Sanchuk said in the Twitter video.

The accused are expected in court at a later date. The charges against them haven't been proven in court.

Police said their investigation is ongoing and that they expected more arrests would be made. Anyone with information is asked to call the Norfolk OPP at 1-888-310-1122.

Did YOU know that #Cannabis plants grown outside the provincial and federal legislation, often times goes back to fund organized crime? 3 people charged and hundreds of plants seized at an address in Simcoe. #OPP continue to investigate. @NorfolkCountyCA #NorfolkOPP ^es pic.twitter.com/4usTdd9GlL