Tragically Hip-signed hockey card to be auctioned off for charity 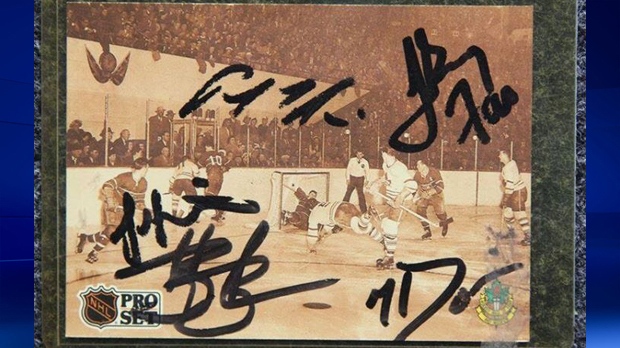 This hockey card, which is signed by the members of The Tragically Hip and inspired their song "Fifty Mission Cap", is being auctioned off until Oct. 26.

A hockey card that inspired one of The Tragically Hip’s most popular songs and was signed by the band’s members is going on the auction block.

Stratford residents Blair and Christy Babcock have placed the card on auction until Oct. 26. After 24 hours, it had received 40 bids, with the top bid being for $1,250.

The card in question is an NHL Pro Set card detailing the story of Bill Barilko, who scored the goal that won the 1951 Stanley Cup for the Toronto Maple Leafs and then disappeared while on a fishing trip. Eleven years later, his body was found in the wreckage of a plane crash – and the Leafs won their first cup since his goal.

Another copy of the same card inspired The Tragically Hip to write the song “Fifty Mission Cap,” which details those events.

Blair Babcock has had the card since he was in university, and got the band's members to sign it. In 2007, his father died from glioblastoma, which is the same form of brain cancer that Tragically Hip lead singer Gord Downie died of earlier this week.

“I thought this would be a great way to pay tribute to them both,” he said in a Stratford Perth Community Foundation press release.