Timeline: Looking back at a 17-year journey to ION

A lot can happen over the course of 17 years.

Here's a look back at the major milestones in what has been arguably the region’s most controversial project ever.

2002
The Region of Waterloo lays out an initial concept for light rail in Kitchener, with plans to run a short line along King Street to a convention centre in order to take advantage of federal funding for tourism projects.

2003
The idea of rapid transit is first proposed in a regional council meeting. 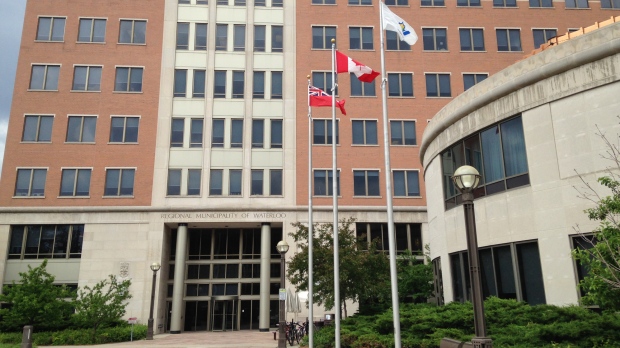 2004
May: All three levels of government announce joint funding of up to $2.5 million for the rapid transit initiative.

2006
June: The province mandates the region to plan for major population growth in its 2006 Places to Grow: Growth Plan for the Greater Golden Horseshoe. Estimates expect major growth in the area of the next 25 years.

“With little opportunity to expand the road network in core areas, Council chose to examine rapid transit as the most sustainable solution to meet the community’s transportation needs,” a handout on the ION reads.

2008
July: The federal government under Stephen Harper identifies the project as a priority, agreeing to work in partnership with the region. 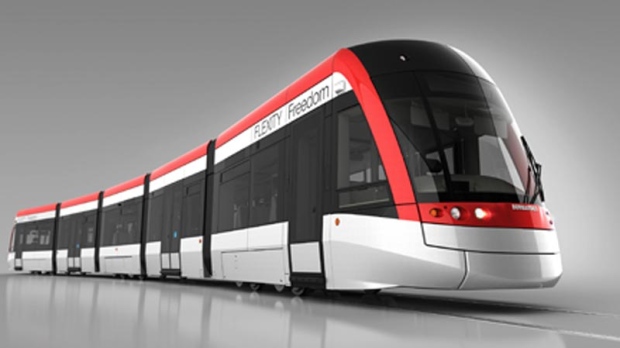 September: The federal government, under Stephen Harper, announces up to $265 million in funding for the construction of a light rail system between Kitchener and Waterloo.

“Projects like this will pay dividends for our economy and our communities long into the future,” Harper says at the time.

Fall: Affordability becomes a concern for the region. A total of 11 different options are tabled and the LRT technology is embraced.

2011
June: Regional council decides to go ahead with the LRT in its current iteration with a staged approach, opening the door for the track and service to scale with ridership and for costs to be managed more effectively.

Phase one will see service from Waterloo to Kitchener, with ION buses travelling between Kitchener and Cambridge. Phase two will add tracks from Kitchener to Cambridge, connecting the tri-cities by light rail.

May: The provincial government, under Dalton McGuinty, gives the project the green light. 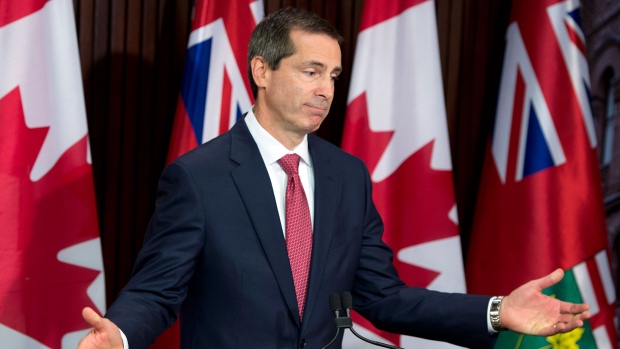 2013
April: The light rail transit system is officially named the ION after more than three months of public consultation. Arc and Trio were the other finalists in the pool. ION means “going” in Greek.

2014
May: The region signs an agreement with GrandLinq for the private company to design, build, operate, maintain and finance the light rail transit system. The move is expected to save the region $14 million.

July: Almost 1,000 employees at Bombardier’s Thunder Bay facility go on strike , which Bombardier later blames in part for the delays of the vehicles.

August: Ceremonial shovels dig in to officially kick off construction for the LRT. 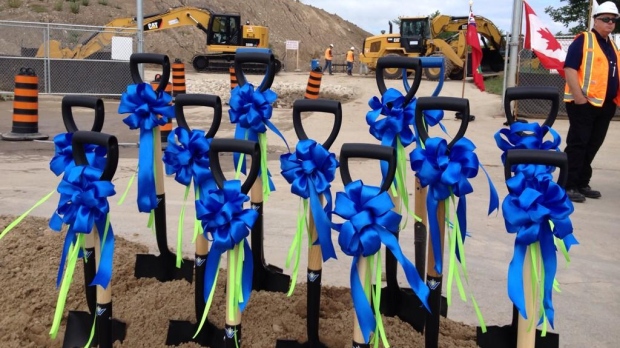 2015
May: The region unveils designs for 19 rapid transit stations.

September: Officials say they believe the remaining ION vehicles will arrive in late 2016.

October: The King Street underpass is about six months behind schedule as the region scrambles to make up lost time.

Regional Coun. Tom Galloway tells CTV at the time that approvals for work relating to the underpass are delayed, partly due to the number of railways and railway authorities being dealt with.

“There were other projects that some of the railways were undertaking at the same time that interfered,” he says. Crews begin looking at doing some construction work during the winter months to get the project back on schedule.

2016
February: Temporary construction domes are built at an estimated cost of between $1 million and $2 million to do temperature-sensitive work at Victoria and King streets.

March: Construction crews find a corduroy road in Uptown Waterloo . The road is believed to be one of the first roads ever created in the area – possibly the very first. Made out of logs, they were placed over swamps and other soggy areas where traditional dirt paths were less feasible. 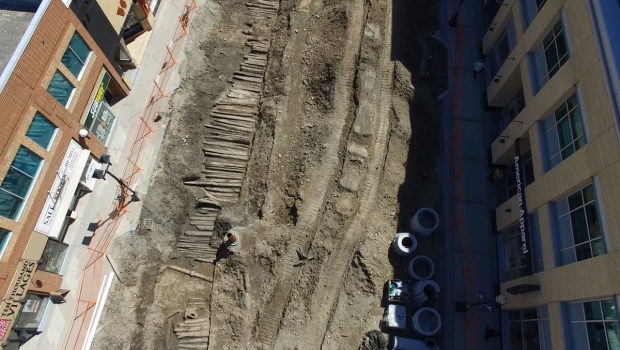 May: “Major problems” with Bombardier’s vehicles delay the launch of the LRT, prompting the region to push back the start date to early 2018.

"Quite frankly, Bombardier's let us down," says Coun. Sean Strickland at the time. "They're having some major problems with constructing our vehicles on time. It is a major disappointment, but something that we're going to have to manage."

A second corduroy road is found underneath a section of King Street North near Conestoga Mall. This time, crews are able to keep working in the vicinity around the find.

October: An oversight in platform spacing leads to crews ripping up newly-built ION stops—in some cases, just weeks after the concrete was poured. 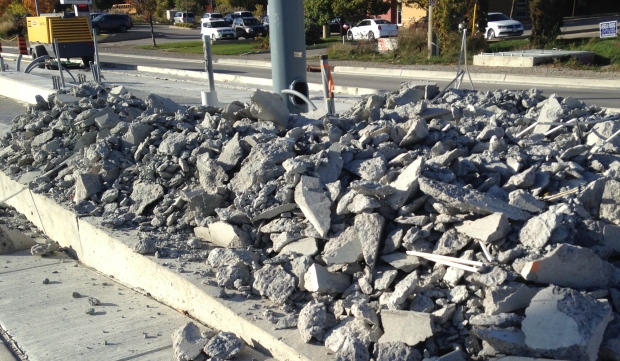 The LRT route forces Oktoberfest organizers to find another place for the Oktoberfest Haus tent, normally erected on Frederick Street.

December: Documents obtained by CTV News through a Freedom of Information request reveal that 21 businesses have filed notices reserving their right to pursue legal action over losses they sustained during construction of the LRT line.

Coun. Tom Galloway, who chairs the regional committee overseeing the LRT project, says he’s aware of “a couple more” companies that have since joined the list.

2017
February: The first of 14 ION vehicles is delivered . This marks the arrival of a test vehicle, which was originally scheduled for August of 2016.

Bombardier pledges to have all of the vehicles in the region by October of 2017, close to the region’s original projected start date.

The region also unveils the 10 different art installations that will adorn the route. 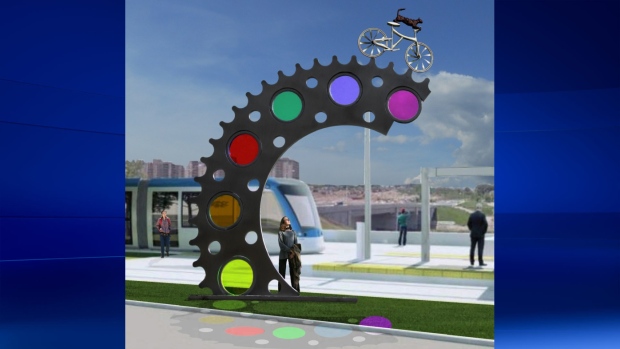 July: A nondescript black sedan becomes the first non-construction vehicle to use the King Street underpass between Victoria and Wellington streets after almost two months of construction.

November: On-track testing begins on the first ION light rail vehicle, around the time that LRT service was originally supposed to begin.

December: Already behind schedule, councillors say the cost of the project is expected to be $50 million higher than initially budgeted.

2018
January: The first ION vehicle delivered to the region is shipped back to Bombardier to be completed. Light rail vehicles begin mixing with other traffic along the entire ION route for the first time.

February: An LRT vehicle makes its way through downtown Kitchener and beyond for the first time ever.

April: The region is in possession of six vehicles. 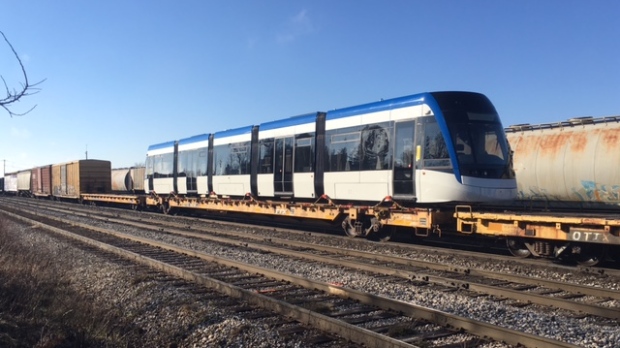 December: The final two LRT vehicles arrive in Waterloo Region on Dec. 2, 2018, more than a year behind schedule and over five years after the original purchase agreement was made.

2019
March: There’s no exact date, but the region says it is confident that it will launch the ION in the spring.

May: Early in the month, Regional Coun. Tom Galloway hints that the region will be announcing a start date at its May 8 council meeting.

He announces that the formal launch ceremony will be on June 21 at 10:30 a.m. , beating the beginning of summer by about 84 minutes.

May: An LRT vehicle is involved in a crash in downtown Kitchener. The driver of a van is charged with failing to stop for a red light. 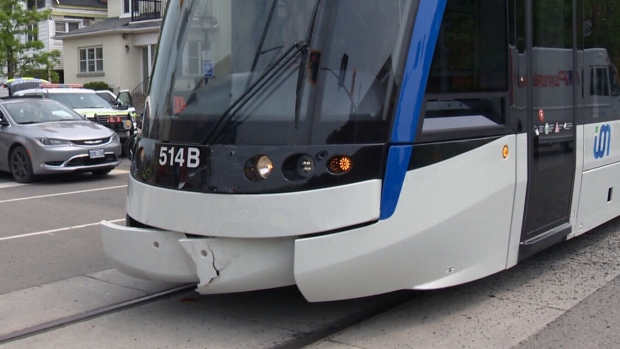 June: Another ION vehicle gets in a crash on King Street West. Police say a car was trying to do a U-turn when the crash happened. It’s the second major and third total crash involving the LRT in two weeks.

June 21: The ION is set to officially begin service with opening ceremonies, just in time for spring.

READ MORE A long-time coming: Looking back at the history of Waterloo Region’s light rail transit