Thousands without power in Waterloo Region

Thousands are still without power after a massive storm system left southern Ontario blanketed with ice.

About 350,000 customers were left in the dark on Sunday morning. More than 250,000 of those were in the greater Toronto area.

Early Sunday, Kitchener Wilmot Hydro said 25,000 customers were without power. By late afternoon that number had shrunk to 15,000.

Power outages as of 7 p.m. Sunday:

A senior official at Cambridge and North Dumfries Hydro says he hasn't seen this kind of devastation to infrastructure in his 38 years on the job.

Crews are working hard to restore power but Cambridge and North Dumfires Hydro says downed poles, the volume of calls and icy conditions are making it difficult to reach some areas, so it may take longer than normal to restore power to some areas. In some cases it could take 24 to 48 hours.

Waterloo North Hydro says it could take 24 to 36 hours to restore power to all affected areas.

“The more weight there is on the branches, the more problems that we’re finding or experiencing,” says Jerry Vanooteghen, the president of Kitchener Wilmot Hydro. “Every time we get one problem fixed there seems to be new problem.”

Anyone who may come across a downed power line should stay more than 10 metres away and call 911.

“It may look safe but it doesn’t mean the power has turned off, even if it’s for a duration of time,” says Waterloo Deputy Fire Chief Richard Hepditch. “Any downed wire should be considered live by citizens.”

Emergency services are receiving high call volumes related to the ice storm. Waterloo Regional Police are asking the public to call 911 only when there is an immediate threat to public safety or serious injury. Anyone needing non-emergency assistance should call 519-653-7700.

The City of Kitchener says they have decided to plow residential streets as the temperature is expected to drop overnight. Waterloo streets were salted Sunday afternoon.

Environment Canada says the storm left 10 to 30 millimetres of ice on trees and cars Saturday night. They warn wind gusts, from 20 to 40 kilometres per hour, are expected late Sunday night and into Monday. These gusts may also cause additional damage to structures and trees due to the weight of accumulated ice.

Woolwich has declared a state of emergency. They’ve opened a warming centre at the Woolwich Memorial Centre on Snyder’s Road.

A partial state of emergency was called in the Township of North Dumfries but that was cancelled late Sunday afternoon after power was restored to most areas. A warming centre at Ayr Fire Hall has now been closed.

Other communities have also opened warming centres for residents. The City of Kitchener says the Auditorium will be open until 11 p.m. Sunday night. The Waterloo Rec Complex will also be open. Residents are welcome to stop by and warm up. 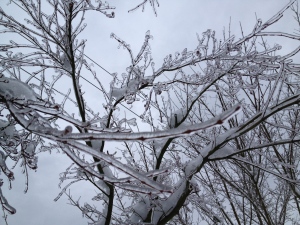 How to be prepared for severe weather