'This could have been avoided': Parents call for safety upgrades after Cambridge boy struck by vehicle on Myers Road

WARNING: This story contains images some readers may find disturbing.

A Cambridge family is calling for action on what they call an unsafe stretch of road after a young child was hit by a vehicle after school last week.

Trish Dean's son, Benjamin, was walking home from Moffat Creek Elementary School on Friday with his older brother Jay when they were hit by a vehicle less than 100 metres from the school on Myers Road.

"Luckily the driver saw my son in time to put his foot on the brake and slow down a little but he did strike my son," Dean said.

The fourth-grader was taken to hospital with minor injuries. He is now at home recovering from scrapes, bruising, swelling to his face and a concussion. 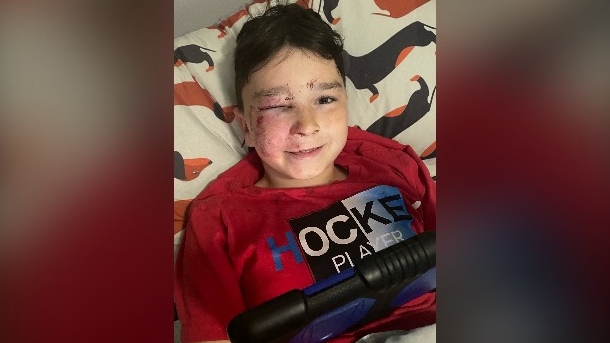 "My eldest son thought his brother had died," Dean said. "Both of my kids now realize how quickly something can happen."

But Dean said she doesn't blame the driver, but the road.

"I don't think he did anything wrong but you know, if vehicles are going 40 (km/h) or aware there are school children around maybe this could have been avoided," she said.

Despite the elementary school being on Myers Road, the speed limit is posted at 50 km/h.

Parents at Moffat Creek say they've been fighting for nearly a decade to have the speed limit decreased to a 40 km/h School Zone, which would include extra signage to let drivers who aren't from the area know that a school is nearby.

"We're hoping that the region will be able to give us a level two C crossing, which is a flashing crossing which is desperately needed here," said Becca Hardy with the Moffat Creek Traffic Flow Committee.

The region is proposing a reconstruction for Myers Road.

"It's gone through two stages of consultation, the plans are in place," said Scott Hamilton, Cambridge Ward Seven Councillor. "I've been vocal, after listening to parents and visiting the grounds many times I don't quite agree with the plans myself."

Plans currently include a traffic island to be built next year only steps away from where Benjamin was hit. Left out are the flashing lights and speed limit decrease parents are hoping for.

Matthew Gerard, coordinating superintendent of business services for the Waterloo Region District School Board (WRDSB) said the board is committed to student and staff safety.

"The WRDSB supports slower vehicle speeds in all school zones, including 30 kph limits wherever possible. In addition, to enhance pedestrian safety through the installation of other traffic calming measures," Gerard said in an email.

A spokesperson for the Region of Waterloo said Myers Road in front of Mofatt Creek Public School is desingated as school zone.

"A school zone is established on any municipal road by the placement of school zone warning signs in the roadside usually within 150 metres of the school property limits on the road," Lynsey Slupeiks, the region's corporate communications manager, said in an email. "Speed limits on Regional roads are established following traffic engineering guidelines, including surveys of the average speed of traffic on the road."