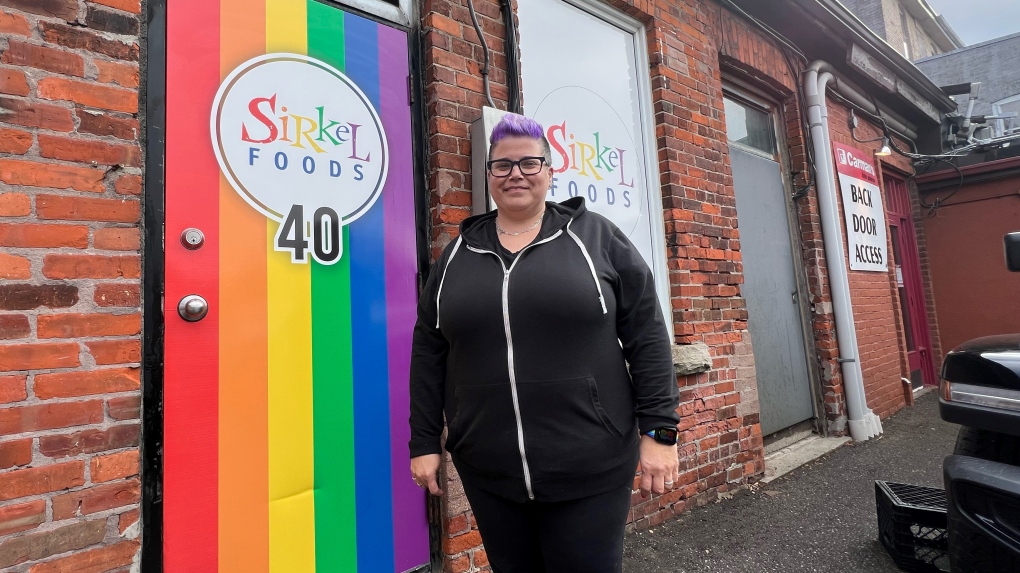 The owner of Sirkel Foods restaurant in downtown Stratford is a proud member of the LGBTQ2S+ community and said the business was vandalized with homophobic graffiti overnight.

“This just brought us back to the reality of the world we’re living in currently. There’s just too much hate right now,” owner Kelly Ballantyne said.

There’s been a community response since the incident. The Stratford Festival raised its pride flag as a show of support.

You may be wondering why we have raised the Pride flag at the Festival Theatre today. In the early hours of this morning, local business @Sirkelfoods was vandalized. (1/3) pic.twitter.com/eLb8HUrrur

“Love always wins. Hate will never win in this community, and we will just scream louder and be brighter,” Ballantyne said.

Ballantyne said police have been notified, but without surveillance at the back of the building, they won’t be able to identify who did it. She’s looking at installing cameras there soon.

“It was a very sad and unfortunate thing to have to see in our community as an organization that works to combat this kind of hate,” said AJ Adams, president of Stratford-Perth Pride.

Adams said incidents like this can take a toll on the community.

“It is very troubling for a lot of folks, especially [those] who are struggling with their sexuality or gender identity – to know that even one person in their community is willing to do this kind of hate,” Adams said.

Just over a year ago, downtown Stratford’s rainbow crosswalk was also vandalized after it was freshly painted.

At the time, it brought Ballantyne to tears.

Ballantyne helped raise money for the rainbow crosswalk project and said if they could overcome that – they will overcome this too.

“We raised enough money to redo the sidewalk. We had enough people that wanted to help me clean up the door. We will always win.”