'The heartbeat of the community': New owner has big plans for Gorge Cinema building in Elora 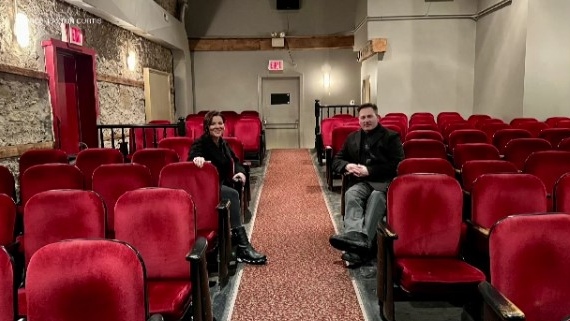 The Gorge Cinema in Elora has been saved.

"This building was literally just falling down," said Kristy Hillis.

"It could be the heartbeat of the community," she explained. "The hope is to do that again, to revitalize it, to get the younger community out, to bring films, events, music and art that everyone can enjoy again."

Hillis said the previous owners wanted to demolish the cinema and replace it with a 60-room hotel.

"I just couldn't imagine a Holiday Inn going into that downtown area."

Her plan is to restore the exterior to its original state, keep the Gorge Cinema and create a small boutique hotel.

The cinema has been a tenant in the building since the 1970s.

"When we got the call from Kristy, it was very welcome news," said Payton Curtis, the owner of Gorge Cinema.

That's because the previous owner had planned to kick them out.

"We just didn't know what we were going to do with it," Curtis said. "It was quite a dark period there for a while."

Thanks to Hillis, the theatre won't be going anywhere.

"A weight has been lifted off my chest, the community's chest" said Curtis. "Everybody was absolutely thrilled."

"It's an amazing theatre," he said. "It's a jewel that somebody has the passion to see it restored to its former glory. As the mayor of Centre Wellington, I'm just thrilled by it."

Hillis said she's currently working with the heritage committee. Drafts have already been sketched but it will still be several years before her plan is completed.