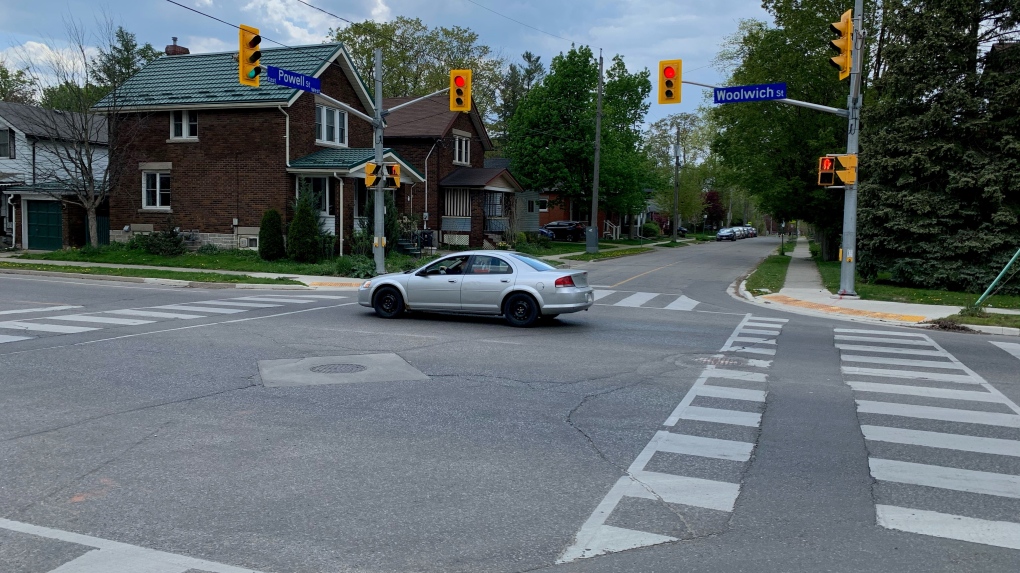 The intersection of Woolwich Street and Powell Street in Guelph. (Krista Sharpe/CTV Kitchener) (May 16, 2021)

KITCHENER -- Guelph police are asking the public if they witnessed or have dashcam footage of a crash that left a teenager with serious injuries.

Emergency crews were called to the incident on Woolwich Street just after 8 p.m. on Saturday.

Officials say two vehicles were driving northbound at a high rate of speed when a white Cadillac collided head-on with a Volkswagen driving southbound.

Police say the other northbound vehicle, believed to be a black BMW, left the scene.

The 14-year-old female passenger of the Volkswagen was initially take to Guelph General Hospital, but later transferred to a Hamilton trauma centre.

Several others were taken to hospital with what are believed to be minor injuries.

The driver of the Cadillac was reportedly seen throwing a backpack out of his vehicle after the crash.

Police say they recovered the bag and found 36.4 grams of cocaine, 15 grams of meth, a quantity of morphine and Xanax pills, as well as digital scales and small baggies. The drugs have an estimated street value of nearly $4,000.

A 26-year-old Kitchener man and a 26-year-old Guelph man have both been charged four counts of possessing a controlled substance for the purpose of trafficking each, while the Kitchener man is also facing a dangerous driving charge. They’re both set to appear in court in early September.

The investigation is ongoing. Anyone who saw the crash or has dashcam or home surveillance footage of the incident is asked to contact Guelph Police Service.