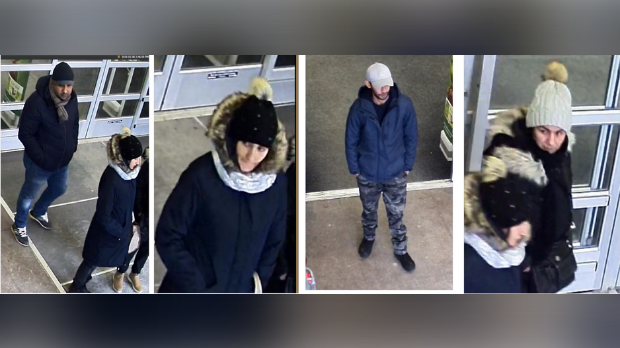 Guelph police are looking to identify these four people in connection to the incident. (Source: Guelph Police Service)

An elderly woman was the victim of a 'shoulder surfing' distraction theft.

Guelph police say she was shopping in a store on Woodlawn Road West on Feb. 8 when it happened.

Two men and two women were involved in the incident. One of the women allegedly created a distraction at the checkout, which allowed one of the men to watch the woman enter her PIN while she was paying.

They then followed the victim back to her car, telling her that her tire was flat. This allowed another person to take her wallet out of her vehicle.

Police say that the victim had her bank account emptied as a result.

Authorities are looking to identify the people pictured above in connection to this scam.

A similar incident happened in February in Fergus, costing the victim in that incident an estimated $15,000.

Waterloo regional police issued a warning about this type of scam after a half dozen reports of similar scams.