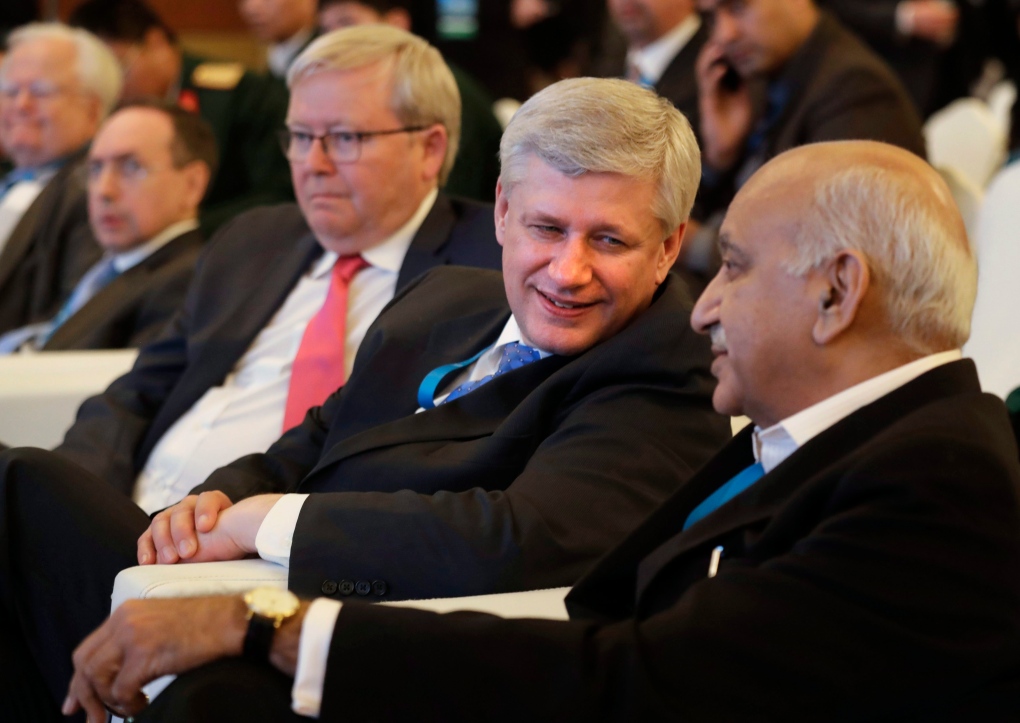 "The Trump presidency is a major source of global uncertainty," Harper said Thursday in a speech in New Delhi, the speaking notes for which were obtained by The Canadian Press.

"We do not have a clear idea of where the new president will head, but we do have some broad outlines."

Harper said Trump is "going to reverse the cornerstone of seven decades of American foreign policy."

Trump's foreign policy will scale back U.S. involvement in global affairs and be guided by narrow economic interests, while coming to view China as a "geopolitical adversary," Harper added.

The speech comes on the eve of Trump's inauguration and represents Harper's most sweeping foreign policy pronouncement since he lost power in October 2015.

The Liberal government says it is seeking common ground with the Trump administration on promoting middle-class growth, but Harper said friends and allies of the U.S. -- he did not mention Canada by name -- will have to bring "real assets" to the table.

Trump has said he wants other NATO members to spend more in the alliance while his incoming commerce secretary is promising a sweeping overhaul of the North American Free Trade Agreement.

Trump spokesman Sean Spicer said Thursday that Trump planned decisive trade moves in the coming days. He said Trump would issue an executive order on NAFTA and the Trans-Pacific Partnership, but didn't say specifically whether he would serve notice of the U.S. intent to withdraw.

"I don't think he's going to wait," said Spicer. "He's made it clear that some of those things are huge priorities for him."

Harper called Trump "a candidate without precedent in American history."

He said Trump rejects "that America alone must accept overarching responsibility for global affairs," and he says that's a notion that's in step with the views of the American public.

Harper said many in the world may not like this foreign policy shift, which will focus on "America's vital national interest, narrowly defined, especially its economic interests."

Trump called NATO "obsolete" this week, reiterating past criticism of the 28-country military alliance to which Canada, the U.S. and most of Europe belong.

The president-elect has complained that the U.S. bears too much of the costs in NATO, which is bolstering its eastern European flank as a deterrent to Russia, after its annexation of part of Ukraine almost three years ago.

Harper said the U.S. global retreat will create significant risks and be the "first big game-changer in American foreign policy under Trump."

The second will be a major shift on China.

"Under Trump, the United States will cease to view the rise of China as benign," Harper said. "It is more profoundly concerned that the massive trade imbalance means America is financing the rise of a geopolitical adversary."

That view is more in step with U.S. public opinion "which has always been skeptical of the foreign policy and corporate consensus that China is more an opportunity than a threat," he added.

Trump angered China when he spoke with Taiwan's president shortly after his election, a move that flew in the face of long-standing U.S. foreign policy.