The study, from researchers in the College of Social and Applied Human Sciences (CSAHS), finds many moms can develop poor attitudes about eating and become discouraged after scrolling through “fit-spiration” posts.

Waterloo mom Sarah Monette said she sees those posts often. In some cases, social media feeds are plastered with before-and-after pictures of women who have shed the baby weight in what can seem like record time.

“How do you look like that after just having a kid?” asks Monette.

She has her hands full taking care of two kids, 6-month-old Maddison, and almost four-year-old Graham. While much of her time is dedicated to mom duties she finds it hard not to compare herself to other mothers on social media.

“Of course I'd like to be thinner and fitter but the reality is when you have a newborn you don't have a lot of time. Sometimes it's hard to find time to even take a shower,” admitted Monette. 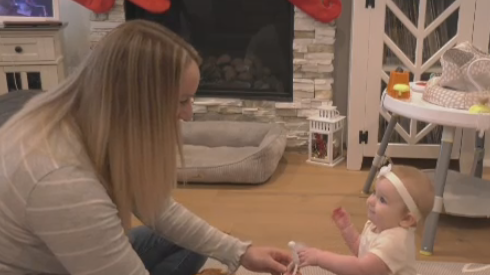 U of G RESEARCH

The research team heard from more than 130 postpartum mothers of infants under six months old. Half of the participants viewed dozen of body-focused social media posts, while the other half looked at posts on infant feeding tips. The moms who viewed body-focused posts reported higher levels of inspiration to be active but also higher body dissatisfaction levels, poorer body image, poorer eating attitudes and thoughts of restrained eating.

“Not only did looking at those body-focused messages have a short-term effect, but we actually measured a month later after they had that exposure, what happened? And those folks still felt worse about their body image and had sustained disordered eating behaviours,” Haines told CTV News.

Haines said those lingering behaviours are concerning as the impact can last long after you put your phone down.

“I think the main message is finding something that you enjoy and a way to enjoy both your baby and your body,” suggested Haines.

“Why are we expecting them to then jump into a boot camp style class or a HIIT-style class?” said owner Andrea Ryan.

Each class begins with tips on how the new moms can workout safely by ensuring they aren't over-exerting themselves.

“If you're having a day where your baby just wants to be held, we're going to do our exercises but instead of using weights or resistance bands, we're going to use the baby instead,” explained Ryan.

Ryan said it is important to build that confidence but without the unnecessary pressure.

“The amount of clients that feel the pressure of society to bounce back and just look like they've never birthed a human is quite shocking,” Ryan said.

Ryan Reynolds went from joy to despair, and punch-the-air ecstasy to desolation.