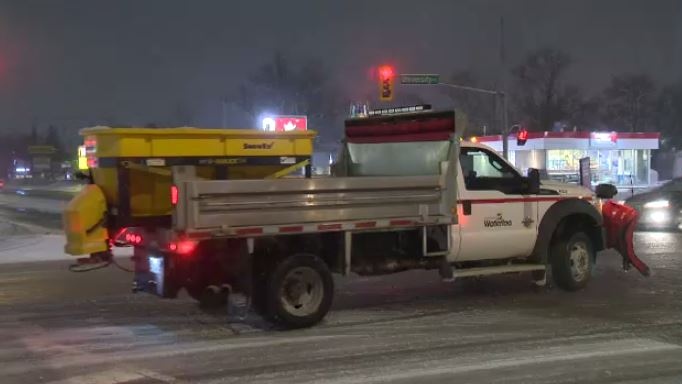 KITCHENER -- Blowing snow can be expected in the Waterloo-Wellington area for the next few days.

Environment Canada has placed a snow squall watch and blowing snow advisory into effect for Southern Wellington County as well as the Region of Waterloo.

The statements issued for Thursday afternoon are expected to last into Saturday.

Environment Canada says the snow squalls expected to develop off Lake Huron may take heavy and blowing snow in land and cause hazardous travel.

Snow squalls can cause weather conditions to vary considerably. Changes from clear skies to heavy snow within a few kilometres are common.

On late Wednesday night, road crews across Waterloo Region were busy plowing snow and salting roads, trying to keep up with what is expected to be the biggest snowfall so far this winter.

People living on residential side streets were being told it could be later in the day on Thursday before their streets are cleared.

The game plan is for crews to tackle major and arterial roads first, to try to keep heavy traffic and transit moving in the morning.

“We have 17 salter routes we need covered”, said Marko Kasunic, Roads and Operations department Supervisor with the City of Kitchener.

“There are 26 plow routes to cover, as well as staff in the background at the yard, making sure trucks are constantly filled with salt as well”.

The OPP were warning drivers in the far southwest to stay off Highway 401 overnight, until conditions improve.

At one point, three tractor trailers were blocking the westbound 401 near Bloomfield Road in Chatham.

A jackknifed tractor trailer was also slowing traffic on the 401 near Tilbury.

No parking on streets Overnight

Kitchener, Waterloo and Cambridge all declared snow events – meaning no parking is allowed on city streets after midnight, or you could be ticketed and towed.

The declaration was expected to remain in effect for 24 hours, or until otherwise advised by the cities.

City officials are also reminding residents not to shovel snow from their driveways, yards or walkways onto streets.