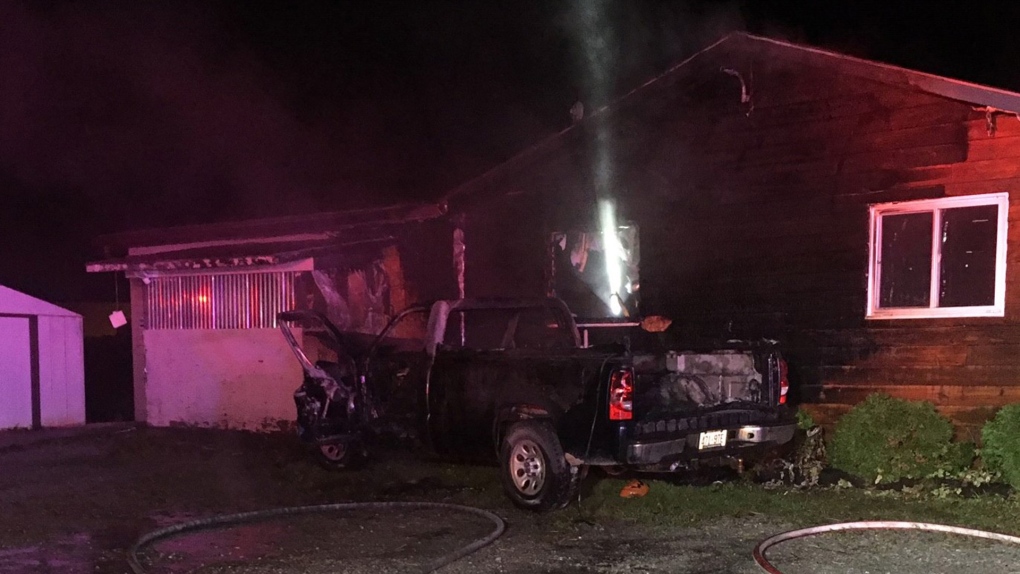 An unknown assailant drove a truck into an Ontario First Nation's newsroom and set it on fire in a "targeted" attack, the outlet's publisher said. THE CANADIAN PRESS/HO, Jim C. Powless, Turtle Island News

The office of an Ontario First Nation weekly newspaper was set on fire during a "targeted attack" earlier this week, the outlet's publisher said Thursday.

Lynda Powless, who is also the owner of Turtle Island News in Six Nations of the Grand River near Hamilton, said the incident happened around 5 a.m. on Monday, when an unknown assailant drove a truck into the building.

"Police told me we were targeted," she said in an interview. "This was an attack on free speech and a free press in First Nation communities."

Six Nations police and the fire department did not respond to a request for comment.

Powless said security video shows a black pickup truck driving into the north end of the one-storey building. After the collision, the cameras melted in the fire and no images of the perpetrator were captured, she said.

Police told her that gasoline was used to set the building ablaze.

"It scared the hell out of me because this is a wooden building," Powless said. "Thank God no one was hurt."

She said police also told her the truck was stolen in Hamilton.

"Clearly, it was planned by somebody. We have no idea why," she said. "I don't know what we've done lately, but people do get upset with us...Maybe it's something we're working on, or something way in the past."

Powless said a Six Nations firefighter on her way in to work spotted the fire and reported it.

"If it wasn't for the quick response, it would have tore through the whole building," she said.

Powless said she got a call about the fire from the building's security company around 5:10 a.m. She immediately rushed over to the newsroom and watched part of the building burn, she said.

The newspaper's photography and technology offices were destroyed in the fire along with some reporters' desks.

"We have lost thousands and thousands of dollars in camera equipment and computers," Powless said.

They also lost the majority of the paper's photo archive, especially those images saved on discs, but some photographs kept in an old metal filing cabinet were spared from the flames. They've also lost a trove of documents, she said.

"These are things we cannot replace," Powless said.

Damage is estimated at $150,000, she said, but that could rise significantly if engineers determine there was structural damage to the building's roof.

"I'm a publisher of an Indigenous newspaper, in a First Nation community, I don't have that kind of money," Powless said. "We are insured, but that won't cover everything."

Despite the fire, Powless said the 12-member team still met its deadline on Tuesday and got the newspaper out.

This report by The Canadian Press was first published Oct. 31, 2019.