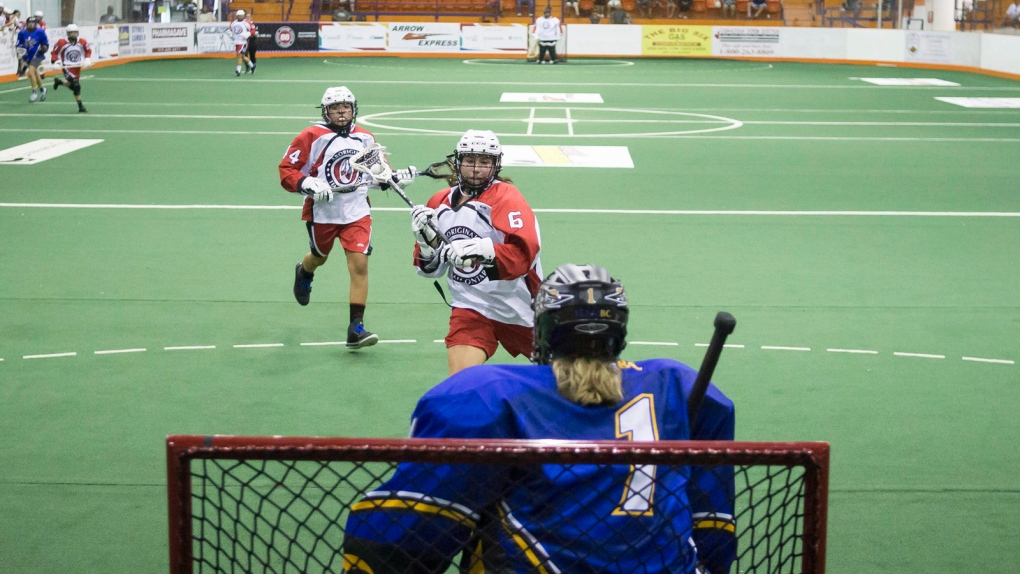 It was like any other game at Iroquois Lacrosse Arena. Family and friends dotted the orange and purple stands. Fans pounded drums and whooped with every crosscheck or goal. Impatient spectators shouted "shoot the damn thing!" if a player held on to the ball for too long.

But history was made as Ontario beat British Columbia 8-7 on Monday morning in the first-ever women's box lacrosse game at the North American Indigenous Games, a youth multi-sport event.

"I felt really proud, it felt really awesome to be part of it," said Ontario forward Shawnah Albert after the game. "The opening ceremony gave me chills."

Added her teammate Shkuhnodin Shognosh-Myers: "We felt really connected with our people. It made us feel like home."

The game between traditional lacrosse powerhouses Ontario and B.C., as well as a game played between Saskatchewan and Eastern Door and the North at the same time at nearby Gaylord Powless Arena, marks a turning point in the sport.

Created by the Haudenosaunee people -- commonly called the Iroquois -- before Europeans arrived in North America, lacrosse has been adopted by First Nations across the continent as something of a national sport. The Haudenosaunee consider lacrosse to be sacred and refer to it as "the Creator's game" or "the medicine game" and they believe it has physical and spiritual healing powers.

Iroquois Lacrosse Arena and Gaylord Powless Arena are in the territory of the Six Nations of the Grand River, the largest First Nations reserve in Canada, and the only one in North America that has all six Haudenosaunee nations living together. As such, the territory is considered by many to be the home of lacrosse.

"Lacrosse, to us, is life," said B.C. head coach Savanna Smith. "To be in the birthplace of lacrosse is just unbelievable. No words can explain it. Some of the girls were over the moon when they heard that they'd get to play at Iroquois Arena."

Traditionally a training exercise for warriors, some First Nations reserves still don't allow women to play the indoor version of lacrosse, although the tamer outdoor version of the sport has been open to women for decades.

"With more girls playing field lacrosse, it helped open things up for box lacrosse," said Ontario head coach Pat Pembleton. "To me, it's the Creator's game, it's the game of medicine and it's important because women are leaders in our community.

"For me, it's special and it's even more special to be with these girls and see the sweat they've put in."

Although all the players were under 19, the magnitude of the game wasn't lost on them. After the game both teams met at the centre of the floor to shake hands and congratulate each other, with some players asking their parents and coaches if they could exchange gifts.

"When I'm playing it's just another game, have fun, do your best," said B.C.'s Naomi Plant, who had never played in a box lacrosse game until Monday. "But before and after the game I feel like 'wow, you're actually doing this, the first time in NAIG history."'

Marcia Trudeau-Bomberry, the CEO of the Games, addressed the crowd at Iroquois Lacrosse Arena before the opening faceoff between Ontario and B.C., and local youth did a traditional dance and sang. The opening ceremony inspired both teams and drove home for them that it was more than just a game.

"When (Trudeau-Bomberry) spoke during the introductions it gave me goosebumps feeling how emotional she was, how connected and proud she was of having this first girls lacrosse game at NAIG," said Albert.

"We're all just super excited to be part of history," said Sophie Scobie, who was quick to add that B.C. scored the first-ever goal in women's box lacrosse at NAIG. "That's amazing, we're all celebrating. We're all just really proud and happy to be representing our communities."