A Six Nations business has raised thousands of dollars for the Woodland Cultural Centre's Save the Evidence Campaign.

The Save the Evidence Campaign aims to raise awareness and funds to restore the former Mohawk Institute Residential School in Brantford to be used as an interpretive centre.

The cause is deeply touching for those at one Six Nations gas station, where staff have been fundraising by selling orange t-shirts, masks and bracelets.

"Everybody knows somebody who has been there, who has problems. I've read a lot and heard a lot of stories and this is just a way of helping to preserve so people can learn from it," said Ken Mt. Pleasant, owner of KT Gas. 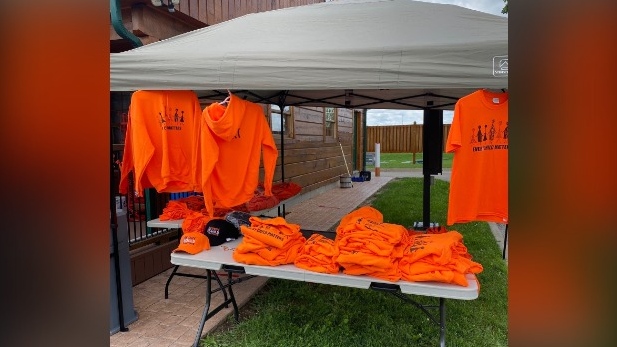 Annette Vreeken donated her time to create hundreds of masks to be sold.

"Trying to do something about turning that around and making people more aware of what has happened and how we can change that," she said.

The group's initial goal was to raise $3,000, but they've since raised ten times that amount.

"A lot of our customers were recommending people to come out here because we were donating 100 per cent of the proceeds to the cause, so it was just word of mouth," said fundraiser Sherry Baker.

Janis Monture, the executive director of the Woodland Cultural Centre, said the donation will go toward phase four of the Save the Evidence Campaign.

"The interpretation phase will be turning the former Mohawk Institute Residential School into an interpretive heritage site where visitors will be taking a guided tour through the building," she explained.

That tour will be told through a child's eyes and voice as they would have experienced living through the school's dark past. It is expected to open in late 2024.