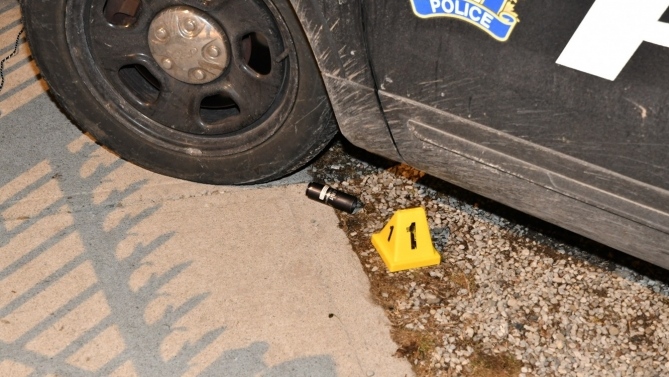 The ARWEN cartridge case at the scene following a Brantford police officer shooting the projectile at a man. (SIU)

A Brantford police officer who shot an Anti-riot Weapon Enfield (ARWEN) at a 53-year-old man earlier this year will not face charges.

The decision from Joseph Martino, director of the Special Investigations Unit, was handed down on Thursday after a nearly four month-long investigation.

According to the SIU media release, Martino found no reasonable grounds to believe the officer involved conducted himself other than lawfully while engaging with the man.

The file is now closed.

According to police, the man indicated he wished to self-harm as he held the knife to his neck.

At approximately 4:44 p.m., emergency medical services were requested at a residence on Victoria Street to assist a 53-year-old man who was in crisis.

Attempts to de-escalate the situation were unsuccessful and the police officer deployed an ARWEN which also proved to be ineffective.

Negotiations continued with the man who voluntarily surrendered.

At 5:13 p.m., the man was apprehended under the Mental Health Act and taken to the Brantford General Hospital.

It was believed the man had not received a serious injury in his interaction with the police.

The man was, however, taken from the scene to hospital, suffering from an abrasion where the ARWEN round had struck him in the stomach area

“I am also satisfied that the force used by the subject officer was justified,” reads the decision from Martino. “Confronted by an unstable complainant, who had entered onto the front porch of the residence still holding the knife despite having repeatedly been directed to disarm himself, the officer reasonably apprehended a risk of grievous bodily harm or death being visited upon the complainant and the officers. As a physical confrontation to attempt to disarm the Complainant could have aggravated that risk, it would appear that the officer acted reasonably when he attempted to disarm and temporarily incapacitate the complainant from a distance with less-lethal force.”

There is not enough evidence to open a formal church investigation into sexual assault allegations against Quebec Cardinal Marc Ouellet, Pope Francis said Thursday. The pontiff issued his statement through Matteo Bruni, director of the Holy See press office.

Parliament's top-secret national security committee is launching a review into federal agencies' ability to intercept private communications, on the heels of the RCMP revealing it has been using spyware as part of major investigations, for decades.

In the wake of the Hockey Canada scandal, some advocates are calling for the use of non-disclosure agreements to be banned or restricted in settlement agreements in cases involving abuse.

A top executive at former U.S. President Donald Trump's family business pleaded guilty Thursday to evading taxes in a deal with prosecutors that could potentially make him a star witness against the company at a trial this fall.

A new study has found that more than half of people infected with the Omicron variant of COVID-19 were unaware they had it. Undiagnosed infections could be the reason why the variant spread so rapidly, according to researchers.

Turkey's president and the UN chief met with Ukrainian President Volodymr Zelenskyy on Thursday in a high-stakes bid to ratchet down a war raging for nearly six months, boost desperately needed grain exports and secure the safety of Europe's biggest nuclear power plant.

Finland's prime minister says she did not take any drugs during a 'wild' party in a private home, adding she did nothing wrong when letting her hair down and partying with friends.