“Remember I messaged you the other day saying ‘Hey David, can you bring me home an Egg McMuffin?’ and you didn’t.”

“Yeah, because I had school and driving to do.”

“Yeah, but you were driving past a McDonald’s on your way home.”

“Yeah, see, things like that you just ask me because you know I’m going to say no.”

“But don’t you remember the one time you asked me if I could go get you a burrito and I did?”

“Yeah? So? You’re right near the burrito place. I wasn’t near the McDonald’s on my way home.”

The fight kept going, but we’ll stop it there so we can start explaining what’s going on.

Kara and David Woodcock are brother and sister. To call arguments like the one above routine would be to undersell their unique relationship. 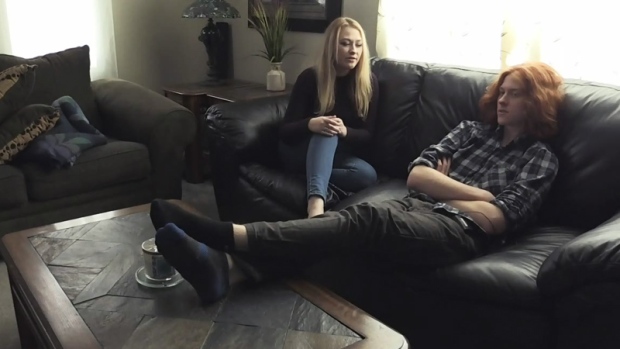 After one recent argument, Kara was so upset that she decided she had to do something to get back at her brother.

Instead of any of the more traditional practical jokes, she fired up her laptop and posted an ad to Kijiji – offering her brother up for sale.

“Selling a rude, inconsiderate, self-centered, nasty brother for the low price of 50 bucks,” she wrote.

“He isn't good for much other than asking you to do things for him but refusing to do anything for you in return.”

The ad went on in that vein, before Kara realized that she wasn’t making her brother sound like a particular desirable thing to buy.

“I'm trying to think of some good selling points here but I can't,” she wrote.

“He is ginger so maybe you could sell his long, mermaid hair for a good price.” 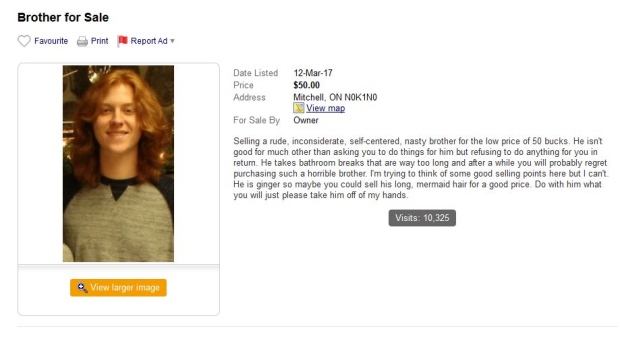 Kara says she wrote the ad to “get a rise” out of her brother – but if that was the plan, it was apparently a bit of a miscalculation.

“He just thought it was funny, and then it wrecked the whole fight,” she says.

Kara says she’s gotten plenty of replies to the ad, which had been seen by more than 10,000 people by Tuesday evening, but no serious offers.

“One father said he wanted to buy him for his daughter, as a boyfriend,” she says, adding that she didn’t entertain that offer because David is only being offered up as a brother.

As for David, he says he doesn’t particularly care that he’s being “pawned off” by his own sister – but he does wonder about the asking price.

David suspects that the lack of interest thus far might be because the ad doesn’t do a good job of portraying his better qualities.

“I don’t think they want me for my personality,” he says, followed by his sister quickly interjecting with her opinion that “nobody would.”

Now that the ad is taking on a life of its own, Kara figures she’ll keep it up until it expires. Besides, it’s always possible that David will do something else that will make her want to be rid of him.

“I know that a week from now, he’s going to be back to his same old antics … and I’m going to have to do something else,” she says.

With reporting by Nicole Lampa