Siblings of sick students can now return to school if they're asymptomatic: WCDSB 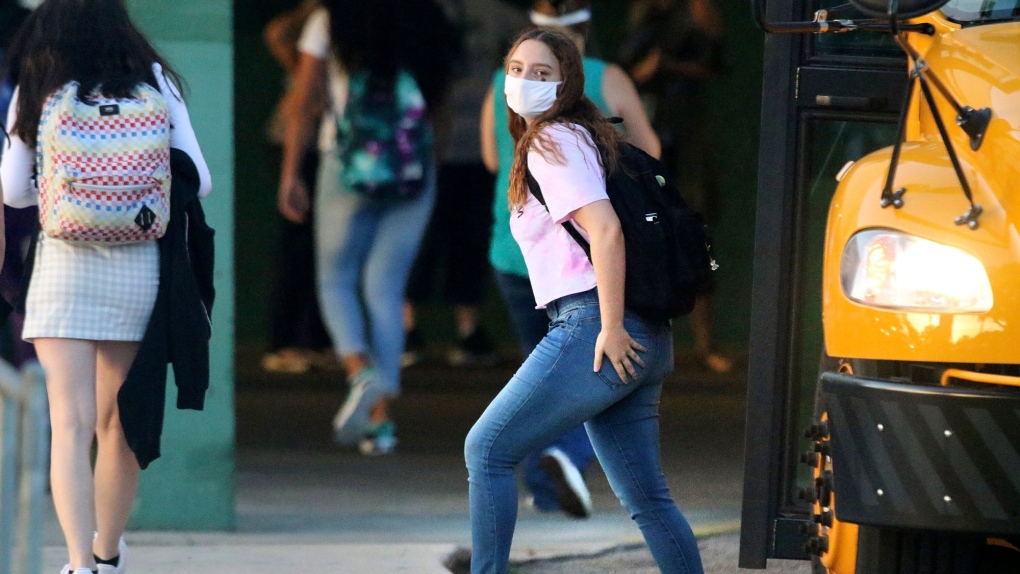 A student arrives by bus on the first day of school before the start of classes at the entrance of Gulf High School on Monday, Aug. 24, 2020, in New Port Richey, Fla. (Douglas R. Clifford/Tampa Bay Times via AP)

KITCHENER -- The siblings of a sick student at the Waterloo Catholic District School Board can still return to school if they're not showing symptoms themselves.

The WCDSB shared the news on its website on Tuesday, citing changes to public health guidance last week.

Previously, school-attending parents and siblings of students who were sick were required to self-isolate until the child had received a negative result on a COVID-19 test, or had been cleared by a doctor to return and were symptom-free for 24 hours.

Officials say that, under the new guidance, asymptomatic family members can attend school as long as they self-monitor for COVID-19 symptoms.

That means that a sibling won't be sent home at the same time as a child who isn't feeling well.

Thus far, the Catholic school board has only reported two cases of COVID-19 in its student body: one at St. David Catholic Secondary School, and the other at St. Anne Catholic Elementary School.

You can track every case in the region's publicly-funded school system on our website.

Why did B.C. have far fewer COVID-19 deaths in long-term care than Ont.?

U.K. experts warn coronavirus is out of control

What worries Canadian doctors most ahead of a second wave of COVID-19?