A couple from Paris, Ont. took the flight of a lifetime on Tuesday, taking off as boyfriend and girlfriend but landing as engaged to be married.

Steve Bowie and Hope Salese said they'll remember the moment they got engaged 10,000 feet in the air forever.

"After lunch, he told me to get in the car and took me to the Brantford airport and I pieced it together partway through," Salese said.

Although the now bride-to-be admitted she had a pretty good idea about what was about to happen, she said the moment was still magical.

"We got on a plane and took off and flew over some fields and then I saw a sign over a field where I grew up," Salese explained. "It said, 'will you marry me?' and I said yes!"

The sign is located just outside New Hamburg at Salese's childhood home. It was made using housing insulating and took Bowie seven hours to finish, with help from family. 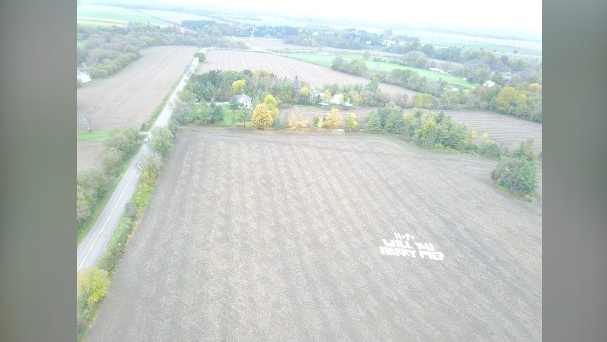 A Paris, Ont. couple took the flight of a lifetime on Tuesday, getting engaged 10,000 feet in the air.

The flight was supposed to happen this past weekend but was delayed due to poor weather.

"She was asking a lot of questions about what was going on and I think pieced it together slowly, but it was exciting," Bowie said. "I popped the question and she said yes and all our family is here and it's a day we'll remember forever."