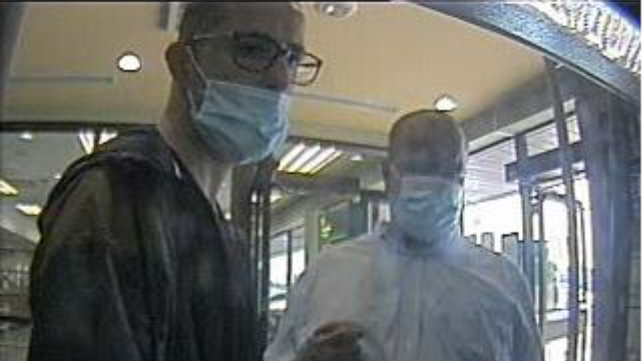 Two men wearing masks seen on camera. Police would like to speak to them in relation to the theft of a 73-year-old woman's wallet. (Source: Guelph Police Service)

KITCHENER -- A 73-year-old woman had her wallet stolen from her purse after an unknown man approached her and told her that her car was leaking some kind of oil.

Police say she had been sitting in her vehicle in a commercial plaza near Paisley Street and Norfolk Street on May 26 when the incident happened.

That's when the man allegedly approached her and told her that her car was leaking some oil.

She got out of the car, saw an oily substance sprayed on the rear driver's side of the vehicle, thanked the man and drove off.

Police say when she got home, she found her wallet was missing. It contained credit and debit cards, her health care, her driver's license and $30.

The man is described as middle-aged, heavy set and of average height. Police say he was slightly balding, well dressed and spoke with an accent.

Then, at 11:55 a.m., police say someone tried to take money out of the victim's account three times at a bank near Eramosa Road and Stevenson Road North.

Police say they weren't successful, and the cards were left behind.

Investigators would like to speak with two people who were photographed in relation to this incident.

The Guelph Police Service says it has learned that several other similar incidents have happened recently in other jurisdictions.

Police are reminding the public to be cautious when they're approached by someone they don't know.