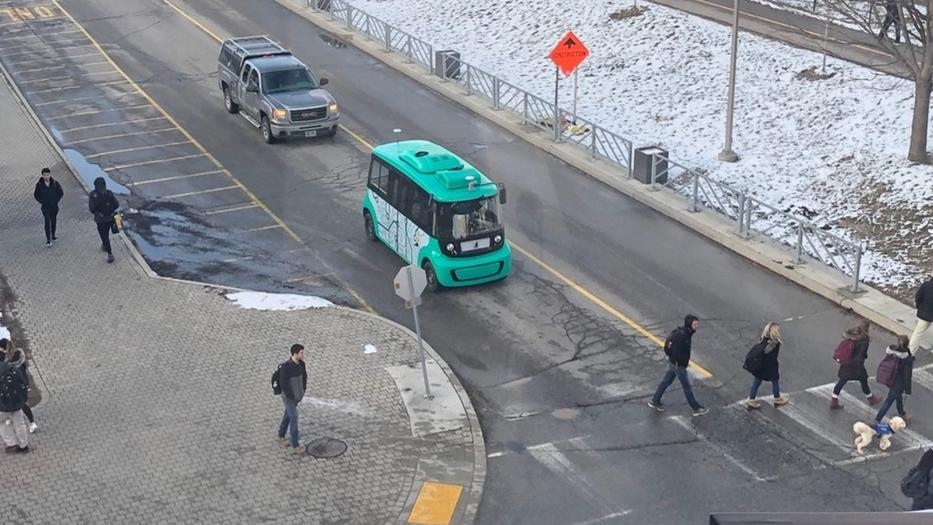 KITCHENER -- Students at the University of Waterloo could soon be able to get around campus using a self-driving shuttle bus.

According to a news release from the university, the bus would be the first of its kind at any academic institution in Canada.

The electric, eight-seat bus can already navigate the university’s 2.7 kilometre Ring Road route on its own, including stopping at intersections, merging with traffic and avoiding obstacles such as pedestrians and cyclists.

A research team led by Amir Khajeapour, a professor of mechanical and mechatronics engineering, has spent over four years creating the autonomous bus project called the “WATonoBUS.”

According to the university, the project has cost well over $1 million and the vehicle is now in its final testing to ensure it can handle winter weather.

School officials said the bus could be operating on Ring Road at the school by the time students return to campus for in-person classes once COVID-19 restrictions ease.

“We’re hoping that when students come back to campus, whether that is in September or earlier, this shuttle bus will be ready to provide a needed service,” Khajepour said in a news release. “Students will be able to take the LRT train to campus, then take our bus to any part of campus.”

The university said the vehicle will initially operate with an on-board driver that will be able to take over the controls if needed.

The equipment that allows the bus to drive itself includes three LiDAR units,a camera on its front, back and sides, as well as wireless communication systems.

“The idea is to make it as robust and reliable as possible, meaning that if any system for any reason fails, other systems are ready to help the bus safely drive and, if necessary, execute a safe stop,” said Khajepour.

There will be five stops along the route and the free service will include a smartphone app so users know when a bus is scheduled to arrive.

The research team behind the vehicle includes around 20 graduate students, post-doctoral fellows, research associates, technicians and professors at any given time.

According to the university, the team is working with five buses in total. One of the buses is in testing, while two are being fitted with instruments, and two more will be equipped once the others are operational.

Preliminary plans also include expanding the services to the David Johnston Research and Technology Park just north of the university’s campus.

According to Khajepour, several municipalities are interested in the project and the underlying technology for potential autonomous shuttle services at airports, resorts, and on city bus routes.

“There are many pieces that are coming together and we’re hoping this shuttle bus will become part of much larger research activities,” said Khajepour.

The university said the system still needs to receive approval to operate, and testing and data collection will continue once it is in operation. They said the plan moving forward is to replace the on-board back-up driver with someone monitoring the bus remotely.