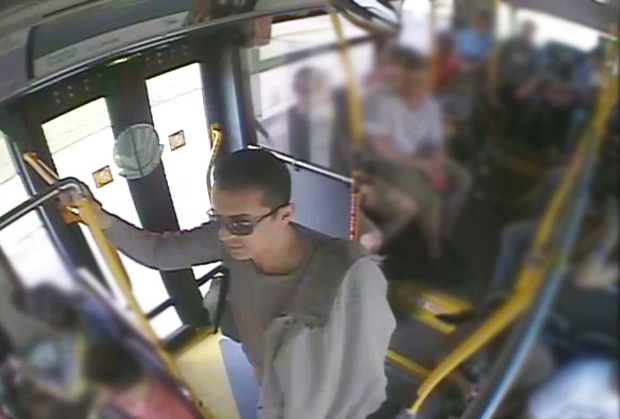 A man accused of touching a 16-year-old girl aboard a Grand River Transit bus in Kitchener is pictured on this surveillance image provided by Waterloo Regional Police.

For the second time this month, a person has allegedly been touched inappropriately on a Grand River Transit bus – and police believe the two cases are linked.

In that case, an 18-year-old woman said she was touched inappropriately by a stranger.

Around 5:30 p.m. Wednesday, a similar incident was reported to police.

A 16-year-old girl was riding on a bus when she too was allegedly touched inappropriately by a man she did not know.

The man is described as being around 30 years old, with tanned skin (police previously said he was likely South Asian), brown eyes and dark, curly hair.

During the first incident, he was seen in light-coloured, fitted blue jeans, as well as a white T-shirt, a black, zip-up jacket and a dark leather belt.

In this week’s case, he was seen in a light beige trenchcoat or similar jacket, dark pants, black sunglasses and facial stubble, while wearing a backpack.

He got on the bus at Fairview Park Mall and hopped off at the corner of Queen Street and Courtland Avenue, police say.