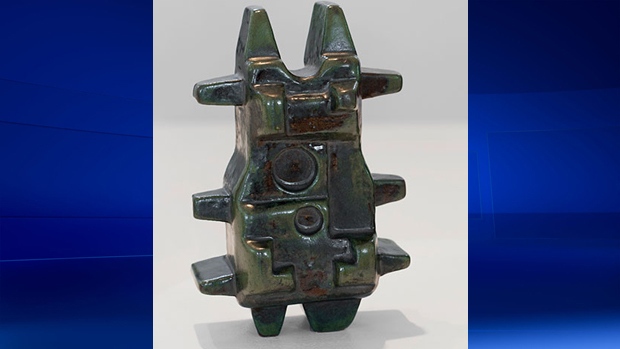 Eidolon I-I, a small green sculpture stolen from the Kitchener-Waterloo Art Gallery, is seen in this photograph provided by Waterloo Regional Police.

It may have taken a few months, but Waterloo Regional Police say they’ve finally found the sculpture stolen from the Kitchener-Waterloo Art Gallery earlier this year.

Eidolon I-I, a porcelain sculpture by artist An Te Liu, was stolen from the gallery in February.

The theft wasn’t publicized until April, when police said somebody had walked into the gallery, placed the sculpture in a plastic bag, and walked away.

One day after police revealed the theft, a 61-year-old Kitchener man was arrested and charged with theft.

Police said Thursday that they executed a search warrant Tuesday in relation to the theft, and found the statue while inside the residence in question.

They did not say where the search warrant was executed.