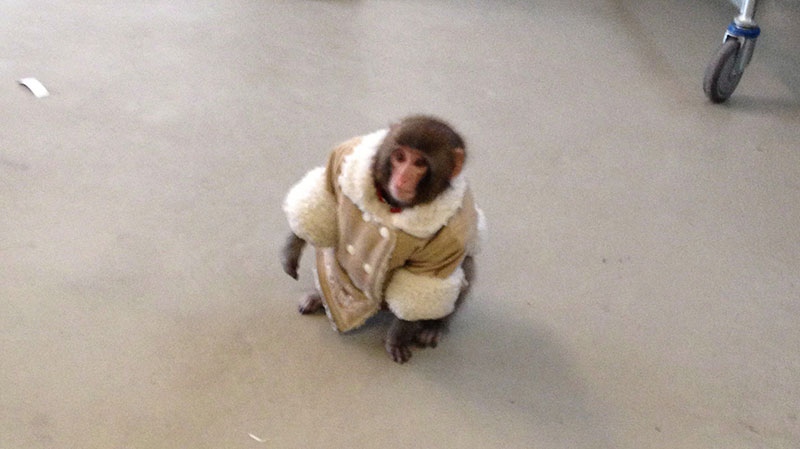 In this 2012 file photo, Darwin, a small monkey wearing a winter coat and a diaper, is shown in Ikea. (Bronwyn Page)

TORONTO -- The Ikea monkey needs help keeping a roof over its head.

Darwin, whose story went viral in December 2012 when it was found wandering outside an Ikea store wearing a shearling coat -- has been living at Ontario's Story Book Farm Primate Sanctuary ever since a court placed the Japanese macaque in its care.

The facility in Sunderland, Ont., east of Toronto, has been trying to raise money for a move to new premises since late last year but revealed this week that donations had dried up and said "the situation is desperate."

Story Book has now launched a renewed push for funds, saying it faces eviction from its current facility on June 30.

"There really isn't an option, we have to succeed," Daina Liepa, a member of the sanctuary's board of directors told The Canadian Press. "These monkeys are going to stay together and we are going to continue saving monkeys' lives."

The sanctuary is looking to raise $250,000 to give Darwin and 19 other primates a new home.

The money will be used to buy land or a suitable large barn, preferably in southern Ontario, which can be customized to house the monkeys, Liepa said.

Story Book is unable to stay in its current home because the property is being sold as part of divorce proceedings involving an individual who started the sanctuary, Liepa explained.

If the sanctuary can't find a new home to move into by June 30, its monkeys will be placed in transitional housing, said Liepa, but a permanent home for the primates is desperately needed.

The sanctuary is being backed in its call for funds by Jane Goodall, who is internationally known for her work with primates.

"All Canadians can be proud of the work done by the Story Book Farm Primate Sanctuary," Goodall said in a message of support. "Primates are our closest animal relatives. They deserve our help."

Story Book bills itself as the only one of its kind in the country.

The volunteer-run facility rose to prominence when it took in Darwin -- who is arguably its most famous resident -- but Liepa notes that the sanctuary is often the only place that can provide a home to certain primates rescued from the exotic animal trade or retired from laboratories.

It was approached this week, in fact, with a request to house two new laboratory monkeys who need a place to live out the rest of their lives, Liepa said.

"It shows the need for us," Liepa said. "Otherwise there isn't anywhere else for these monkeys to go."

In Darwin's case, the sanctuary was able to highlight the problems associated with monkeys who are kept as pets.

Darwin became something of an international celebrity after he escaped from a crate in his owner's car parked in a Toronto Ikea parking lot more than two years ago.

Images of him wearing a diaper and a tiny beige shearling coat as he wandered all the way into the store triggered a social media frenzy.

Animal services seized him and sent him to Story Book, prompting his owner, Yasmin Nakhuda, to sue the sanctuary in an effort to get him back.

An Ontario Superior Court justice then ruled that Darwin is a wild animal and that Nakhuda's ownership ended with his escape from her car.

Nakhuda decided to appeal the ruling but abandoned her effort, saying it was too costly and had little chance of success.

Darwin is now 24 inches tall, full of energy and will continue to grow, said Liepa.

"It would be tough to get a diaper on him now," she said.