Restaurants struggle to survive during COVID-19 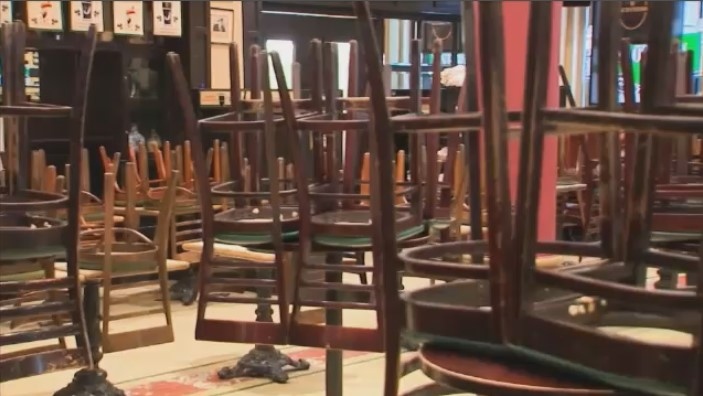 KITCHENER -- The financial fallout of COVID-19 can be a struggle if you're a business owner, particularly if you’ve been ordered to close by the government.

Those in the hospitality industry have been forced to shut their doors to dine-in customers, meaning revenue is now at an all-time low.

The new rule has rocked the restaurant industry with many forced to lay off most of their staff.

“Scared for staff, but also scared for the friends I’ve had throughout the years,” says Jocelyn Maurice, CEO of Pearle Hospitality.

Her company says more than half of the people who have applied for employment insurance are from the industry.

The local hospitality group laid off close to 1,000 people last month and worries they won't have enough money to hire them back down the road.

The company’s chief operating officer says the fear is many businesses will go bankrupt.

“I'm worried for people who have had small businesses that have risked their homes, their mortgages, their whole.lives in order to create something that can be pretty magical,” says Maurice.

Some restaurants are still offering delivery options during the pandemic, but it’s not yet clear if that will be enough to keep them afloat.

"These months that we've closed...there's no way to ever make that back," said Saddy Kulafi, co-owner of Jack's Family Restaurant in Waterloo. "We have 94 staff and we laid everyone off. We had no choice."

According to a survey by Restaurants Canada, more than 300,000 food service workers have already lost their jobs in Ontario, and they might not get them back if conditions continue.

The survey says one in ten restaurants have permanently closed due to COVID-19.

"What if you don't qualify?" said Sarah Whearty, owner of Mamma D's Delicious Eats. "There's always that something."

The Kitchener bakery opened their storefront last year and is now resorting to preorders, delivery, curbside pickup, and online orders.

Play a Latte, a cafe in Waterloo with a playplace for kids, is now offering education and creative classes online to generate revenue.

"There was a 95 per cent drop [in revenue]," said co-owner Ronak Patel. "Going to Play a Latte might not be people's first priority versus going to get groceries, paying off rent, or paying off some of the debt they've accumulated."